LYNDON ‘KING’ ARTHUR: “I’M NOT IN BOXING TO CONCEDE ANYONE IS BETTER THAN ME, AND THAT INCLUDES MR ANTHONY YARDE!” 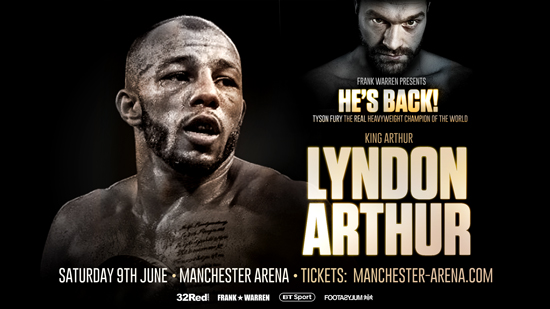 This weekend, Moston masher Lyndon Arthur gets to state his case that he, rather than Londoners Anthony Yarde or Joshua Buatsi, represents the best long-term bet of adding to England’s haul of five world light-heavyweight champions.

Since being extended the full four round distance on his September 2016 pro debut, the 6ft 2in Manc slaughterman has savaged his last nine quarry inside five rounds (one disqualification win) and is creating quite a commotion in his native north-west.

With an amateur CV listing 50 bouts, several England vests and WSB representation, the former two-time Senior ABA finalist’s pedigree far eclipses that of ‘The Beast’ from east London. However, sans singlet, terminator Yarde has left 14 of his 15 paid opponents kissing the canvas and is already highly ranked by both the WBO and IBF.

‘I’m constantly asked but I refuse to compare us,’ continues Arthur.

‘We’re rivals but I don’t disregard what Anthony’s achieving. He’s a very good fighter. I rate him highly. I congratulate any success in any walk of life, I wish there were no poor people and everybody could do well. But that’s not life. Provided Anthony treats me well, he’ll hear no badmouthing from me. But when we do get there, I believe that I have the attributes to beat him.

‘I don’t need to call people out. The fight is inevitable if we’re to get to where we want to be. Time will tell but I’m very confident in my ability to rise above both him and Joshua Buatsi. I just believe in myself.

‘You don’t ever want to be a loser when you love this sport as much as I do. I’m not in boxing to concede anyone is better than me….and that includes Mr Anthony Yarde.’

‘King Arthur’ commenced his pro career 16 months later than Yarde, has engaged in five fewer fights and is yet to confront an opponent with a winning slate. However, given he didn’t have a competitive bout until he was 19, the brutal manner in which he has butchered a list of battle-hardened circuit fighters merits serious attention.

‘I’ve a great jab, great boxing ability, I can box forwards or backwards and I’ve reasonable power, especially with the right uppercut. Above all, I’ve exceptionally quick hands for a big man. It’s my speed that takes them out.

‘I’ve already had very competitive spars with the likes of Callum Smith, Jordan Thompson, Mark Heffron, Jack Massey, Josh Buatsi and others on the GB set-up so I know when I acquire the necessary rounds and experience, I’m going to be right up there.’

While Saturday’s foe Adamu has already blown out the candles on his 40thbirthday cake, he’s been halted just once – by WBA Super-Middle boss George Groves – in a 39 fight 17 year career that has included 12 round championship scraps with the likes of Carl Froch and Rocky Fielding.

Entering on a streak of five wins, four by stoppage, it is unlikely that the proud African has come to lie down passively.

‘Adamu has to be viewed as my stiffest test because he’s the first with a winning record. It’s a big step up. I’ll have ‘happy’ nerves, ‘keep me sharp’ nerves!’ concludes Arthur, father to a three year old son.

‘This should help show what I still need to work on. I’m expecting six hard rounds but if I can get him out early, I will.

‘I’m expecting Adamu to be as good as he was in his prime against Groves but, even on that performance, I still know I’ve got more than enough to beat him.

‘I think I’m a great boxer who can knock people out and that’s what fans want to see.’

Tickets for He’s Back are available purchase via the Manchester Arena on www.manchester-arena.com and tel: 0844 847 8000.