LYON WOODSTOCK: “IN THE GYM I’M KNOCKING OUT GUYS WEARING HEAD GUARDS AND WEIGHING THREE, FOUR, FIVE WEIGHTS ABOVE ME!” 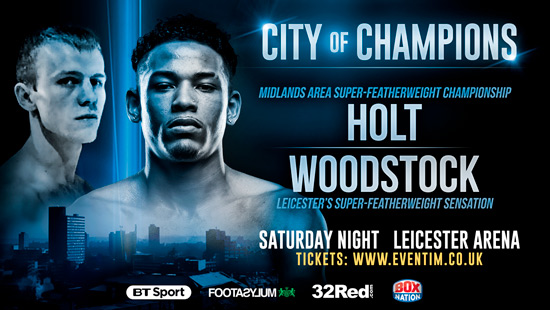 As he prepares to embark on life in championship boxing, potent punching Leicester super-feather Lyon Woodstock reflects that the trail of destruction he has left is as much a product of the vicious mindset conditioned on the unforgiving streets of the city’s Beaumont Leys district where he was raised, as to the speed, power and timing fashioned in the boxing gym writes Glynn Evans.

Bright, entertaining and mild of manner beyond the ropes, the 5ft 9in East Midlander has battered eight straight since debuting in June 2015 and, on Saturday, he intends exacting further carnage when he collides with Midland Area champ Paul Holt in a tasty looking 10 rounder at the Leicester Arena. BT Sport and BoxNation screen live.

‘The weight and experience of an opponent mean very little to me,’ says the 23 year old who is feted for his crippling body shots.

‘Rucking for survival on the cobbles as a kid, I never got to think if my antagonist was heavier, whether they’d had more scraps than me, or who they had with them. You just steamed in.

‘If someone posed a threat to me, my mum or my daughter, they’re going to sleep regardless.  I HAVE to win. That’s a mentality I’ve carried all my life. I fear no man but God.’

A former ABA Elite semi finalist in just his 19th amateur start, the man who calls himself ‘King’ for professional purposes is not without natural assets such as speed and mobility.

‘I bring a lot of character and colour. I’m never boring,’ quips lethal Lyon who racked up 16 early wins in 25 amateur sprints.

‘Too many boxers today are overly technical, frightened to take risks. But the fruits and rewards are bigger if you take a chance. There’s method behind my madness.’

Though the Hackney-born hitter was slugging on the street and school yard for as long as he can remember, he was a relatively late entrant to formalised fighting. Starting out of the Leicester Unity gym at 16, he made an immediate impression, splaying all of his first 10 amateur opponents before the final bell tolled.

His riotous rep transferred to the profession, though he concedes the transition brought initial frustrations.

‘At the beginning I weren’t happy,’ declares Woodstock who, after two quick stoppages, was taken to the cards in four of his next five starts.

‘I was getting given these opponents who just covered up and were impossible to knock out. Those British journeymen have faced everyone yet rarely get stopped. It was very frustrating because I seldom needed the cards in the amateurs. I was putting everyone away.

‘The biggest punchers secure their knockouts by different methods. (Mike) Tyson did it primarily with speed and aggression. Roberto Duran had clubbing power and punched through the target. I’m like Roy Jones Jr. I do it with timing by connecting clean in the middle of the shot.

‘In the gym I knock guys out who are wearing head guards and weighing three, four, five weights above me. If opponents come to beat me, there’s a high chance they’re getting stopped but those journeymen were giving me nothing to work with.’

The action should certainly be two way when he faces easily his stiffest test from ‘The Incredible’ Holt in what promises to be a heralded homecoming for the Leicester lad on Saturday week.

The 26 year old Brummie southpaw captured the crown by brutally dismantling Tamworth’s 6-2 Louis Fielding at Walsall Town Hall last September and, while Woodstock is yet to travel beyond six rounds, the defending champ negotiated a competitive ten with future Commonwealth king Bobby Jenkinson in a 2015 Midland title gig. 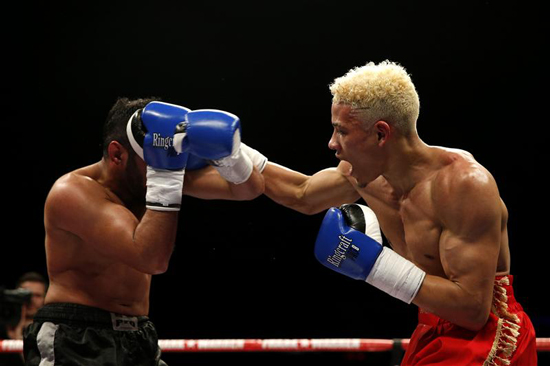 If Woodstock fails to execute early, his lungs and whiskers will certainly be put through the grinder.

‘I’ve not really had to change or add to my usual preparation, I just do a bit more of everything,’ disclosed Leon who has been trained and mentored by Ajmal ‘Hudge’ Butt since first lacing gloves.

‘To be honest, I’ve been sparring 10 rounds since I was amateur so my body has long been conditioned to it. I always train for Superman, anyway. Every opponent has two fists, a set of balls and their pride. Anything can happen in boxing.

‘I’ve seen Holt’s fights. He’s quite small, coming up in weight but he’s got quite a high work rate and brings the experience of completing the 10 rounds before.

‘His dad (Mark), who’s also his coach, won the Midland Area (featherweight) title back in late 80s. Hopefully, he’ll come to win. This is his big chance to wipe me out and take my spot with Frank. Come and try it, please!’

As he fast advances up the rungs, the Jason McClory managed flier acknowledges that he’ll need to incorporate some stealth to supplement his obvious strength and spite.

‘I’ll have to be smart. The trick will be to get Holt to feel comfortable, let him become brave, then strike when he least expects,’ he concludes.

‘I win cos I’m Lyon Woodstock; because of where I come from, because of my work ethic. If I lose, my stock drops. I get less money and, with a daughter and another child on the way, that can’t happen.

‘Holt is threatening to interfere with my life. It’s personal!