LYON WOODSTOCK: “WHO HAS HE FOUGHT?” 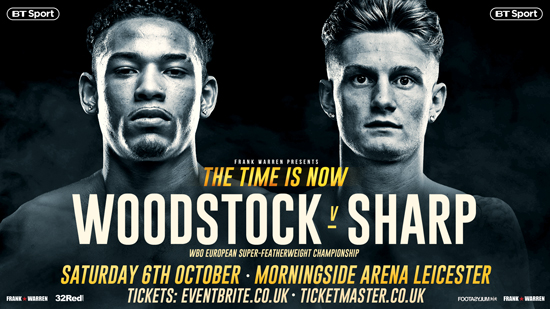 Lyon Woodstock disapproves of Archie Sharp’s professional boxing record and questions the calibre of opponent the Londoner has faced as the war of words continue between the two.

Both fighters have traded verbal jabs between themselves all through-out the build up to their encounter in Leicester on October 6th. Woodstock (11-0) recently stated he will be a big step up in level for Sharp (13-0) and has backed up his statement by questioning the names on his professional record.

“Yeah he’s managed to stay unbeaten but who has he fought? said the WBO European super-featherweight champion.

He continued:” I look at the names on his record and all I’m thinking to myself is- yeah I would have stopped him.”

Sharp responded to Woodstock’s remarks by calling him a ‘one-dimensional’ fighter and believes his boxing abilities are ‘too cute’ for the Leicester native’s attacking style to be a problem.

“He can say stuff like he’s ‘too cute’ all he likes, I know I will make this fight my kind of fight. Once he’s in the eye of the storm, he isn’t getting out.” stated Woodstock.

“Once you take me out the freezer and put me in the oven, that’s when I come alive. I’m the kind of fighter who relishes that kind of fight, it will be the total opposite for him.

“He’s going to start getting gassed, desperately throwing shots and that is when he will leave his chin open for me. That is the exact position I will make him be in before I hit him sweetly on the chin and send him packing.”