Maccarinelli ready to rumble in Russia against Jones

BIG MAC BACK IN THE USSR!

Dynamite-fisted Enzo Maccarinelli is back in Russia this time to face legend Roy Jones Jnr as he aims to replicate his stunning first round knockout of Alexander Kotlobay five years ago in the country. 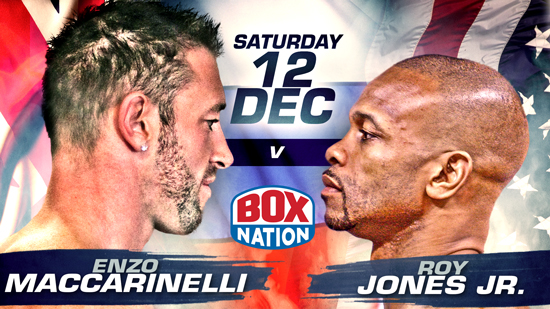 The Welsh power-puncher faces Jones, a five-time world champion and 1990s Fighter of the Decade, in a ten-round cruiserweight contest at the VTB Arena, Moscow, this Saturday, exclusively live in the UK on BoxNation.

Big Mac shocked the mighty nation on his last visit in April 2010 in St. Petersburg when he smashed Kotlobay inside a round to win the European cruiserweight title and he says he’s ready to cause another seismic upset against Russia’s newly adopted son.

“I absolutely love fighting away from home, it gives me that sharper edge to my performance when I’m outside my comfort zone and I’m up against it, that’s when the real Enzo Maccarinelli comes out,”

“Roy Jones has been adopted by the people in Russia so he’s their man, he’s their hero, so I know that I’m coming into this fight as the enemy.  At the end of the day I’m not here to make any friends I’m here to smash up Jones and get the win,”

“I’ve done it before over here, I destroyed Kotlobay inside a round, the Russian’s really underestimated me that night, they may be a bit wiser this time around, but I’m ready to cause another shock out here,”

“Physically I’m ready and mentally I’m strong and nothing is going to get in the way of the job that I’ve got to do.  As soon as that bell goes, all the legendary stuff, his ring achievements, everything gets put aside and I’m going straight for him.”

The Channel Of Champions, BoxNation, will televise exclusively live Jones v Maccarinelli from 4pm on Sky 437/HD 490, Virgin 546 and Talk Talk 415.  Subscribe at www.boxnation.com  Or watch online at Livesport.tv and via iPhone, iPad or Android.