MAKE MINE A DOUBLE 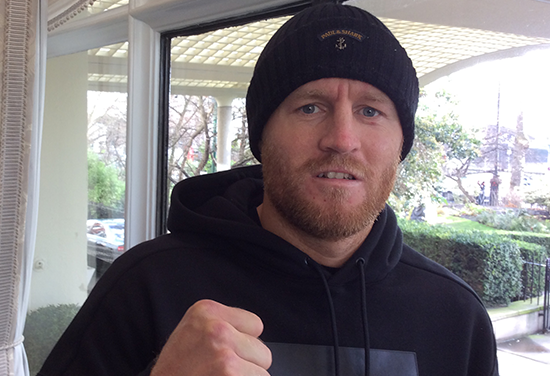 The prize on offer for Terry Flanagan – should he beat Maurice Hooker at the 02 Arena on April 14 – is becoming a two-weight world champion and the first Englishman to do so at lightweight and super lightweight. In his latest exclusive Fighter Diary, Terry looks ahead to his big night and reacts to the potential challenge of a domestic rival…

THE PROSPECT OF fighting for a second world title definitely gave me a buzz when I began preparations to take on Maurice Hooker on April 14 and I can’t wait for it.

When I heard there was the chance of fighting for the WBO world super lightweight title I jumped at the chance and, with it being against Hooker – who I am confident of beating – it excited me.

By the time I get in the ring it will have been a year since I last fought so it will be great to get back in the thick of it.

Hooker’s size will bring something different but I have never really struggled with taller fighters – I’ve just done my own boxing and it has always worked. I am hoping this will be the case again.

People tell me I have the chance of making a bit of history at the 02 Arena in becoming the first Englishman to win a world title at lightweight and super lightweight.

I don’t really look at it like that. I just look at one fight at a time, if I win this then great because I am not one to particularly look at my career and think I have done this or done that.

I will probably look back when I retire and think I achieved something. People do say to me that I don’t know what I have done, but it is nowt to me and one of those things at this point in time.

Hopefully when I retire I will have stuff to show my kids and grandkids.

Beating Hooker will not necessarily be the end of my weight gain as I am plenty big enough and plenty tall enough to box at welterweight.

I walk about big and I don’t see a problem as long as I take my speed and skills up with me.

I am looking forward to sampling what it is all about at the 02 as I have never been there before and I am excited to fight somewhere new.

Team Turbo will all be down to support me as usual and I am sure they will make a racket on the night. I might get a few more come along with Man City down to play at Tottenham that day.

Hopefully we can make it a win double down in London.

If I do my bit then, from the talk going around, it appears Jack Catterall is keen to try and take the title off me.

There seems to be a lot of noise being made about some sparring sessions a couple of years ago and I don’t know what he is going on about.

I thought I won those spars and if he thinks he did then he is deluded.

I’m not too bothered about it though, if that is what he thinks, let him think that because he will be in for a shock if the fight ever does happen.

That fight is a mile away at the moment because I’ve got to come through Hooker first and then I will be looking towards unification fights.

They are running before they can walk and, going off his last performance, it doesn’t exactly fill me with fear!