MARCO McCULLOUGH: “I’VE FOUND MY LOVE FOR IT AGAIN!” 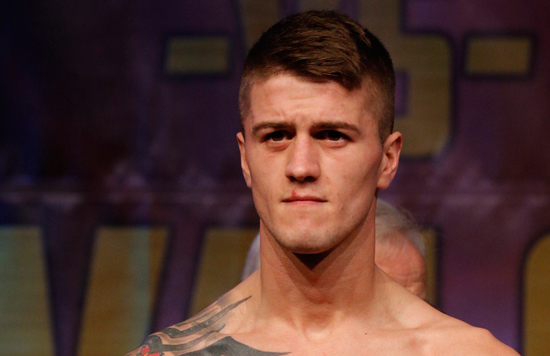 Rewind to September 2014 and Belfast featherweight prospect Marco McCullough was filed in the ‘can’t miss’ drawer of the cabinet.

During his opening 12 gigs as a professional, the all-action ex amateur standout, then 24, had bolted to Irish and WBO European titles, scalping ex world champion Dimitry Kirillov on course.

However, a brace of stoppage defeats in 2015-16, harnessed his charge, prompting a change of camp plus a style makeover.

But McCullough’s proven ability to shift tickets has resulted in new management team MGM delivering an express route back to contention this weekend.

This Saturday, the 26 year old from the Shankhill Road challenges Mexico’s Luis Lugo for the WBO InterContinental belt knowing victory could provide his password to the world rankings. BoxNation screen live.

Glynn Evans found him bursting with optimism when they spoke on Sunday.

That’s correct. Big John Breen is a great guy who treated me like his son so it was very hard to leave him. But I knew it was time for a change.

I’m now managed by MGM in Marbella and trained by Charlie Toland, a long time friend, at the Ormeau Road amateur gym in Belfast. I liked Charlie’s techniques and we bonded immediately. While John’s methods were ‘old school’, Charlie’s right up on his sports science.

I’ve also done some work alongside our national amateur squad at the Jordanstown Sports Centre and I feel I’m learning more from them than they’re learning from me. We’re blessed with some of the best amateur coaches in the world here. 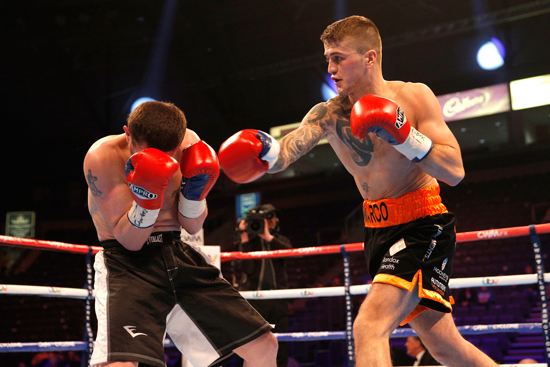 The reason I signed with MGM is that they believed in me and can deliver the big fights. Victory on Saturday could potentially move me into the top 15 in the world (with the WBO).

You’ve suffered three unscripted losses as a pro. How difficult has it been to overcome them and regroup?

First of all, I strongly dispute the verdict to (two weight Welsh champion) Dai Davies in my second pro fight and the first round stoppage in Germany (to Hungary’s Zoltan Kovacs) was just a crazy situation.  I should never have accepted that fight at the last minute and I messed up with my weight.

But my last defeat (an eighth round stoppage in a Commonwealth title tilt to Morecombe traveller Isaac Lowe) was definitely the hardest to accept because I really didn’t expect to lose. I struggled to grasp how it ever happened. I started to doubt whether I’d be able to push on and fulfil my goals.

As an amateur, you won five All-Ireland titles at various levels and were a regular international. Despite bagging the Irish and WBO European belts, would it be fair to say you’ve underachieved thus far as a pro?

Oh definitely. I’ve never really watched back one of my pro fights and thought I really impressed That’s a major part of why I felt I needed a change.

Previously, I was sparring five times a week against the same partners and I was picking up little injuries. I’d be entering the fight sluggish, feeling stale in my brain.

Lately, we’ve gone back to focussing on my old boxing skills. In the amateurs I was largely a sharp, back foot counterpuncher but I’d started picking up bad habits, only marching forward. It’s taken a little while to shed those bad ways. Now I’m back to the old me!

I’m still to show my full potential but I’ve found my love for it again. I can assure the fans that nobody’s seen the best of me yet.

You built up a fanatical following in Ulster after making your first 13 pro starts in the province but have fought there just once in your last five. How big a deal is it for a boy from the Shankhill Road to fight before the Belfast fans?

Oh, it’s massive. My mum always sorts out the tickets and with a week still to go, we’ve already shifted well over 300. I try to get along with everybody and I guess the fans must enjoy my brawls.

Carl (Frampton, the city’s two weight world champion) created huge hype here in recent years and made Belfast a fantastic place to fight. But the fans have been starved of big shows since he’s gone to the States. Now MGM intend getting involved on a regular basis, it’s going to be brilliant for boxing in this city.

During your 18 pro fights, you’ve already encountered opposition from 13 different countries but never one from Latin America. What fresh challenges do you see Mexican Luis Lugo presenting?

Initially, I was due to fight Michael Roberts from Scotland (unbeaten in 19) but he pulled out and, stylewise, it’s a complete change. I trained for a boxer but I’ve landed with a brawler.

My coach has studied the Mexican and warns that he’s a hard puncher who’s unbeaten in his last three. These Mexicans have to fight simply to survive so I doubt I’ll have to go looking for Lugo which was the case with many of the Eastern Europeans I faced earlier in my career. These Mexicans all come to get ya and are notoriously hard and tough. This one apparently made his pro debut when he was just 13!!

Finally, what can local fight fans and BoxNation viewers expect from Marco McCullough on Saturday night?

I want to show how much I’ve changed. I’ve been working on lots of things in the gym, rekindling good habits. I’ll be back to my boxing; nice and sharp, good defence. Before I felt tired and drained going into fights. Burnt out. This time, I’m entering with so much confidence.

Lugo’s lost just five of 25 in pretty decent class so, touch wood, it’ll be a great scalp that’ll push me right back up there.