MARK HEFFRON: “BILLY JOE IS A TRICKY CUSTOMER BUT I’M NOT THAT FAR AWAY FROM HIM!” 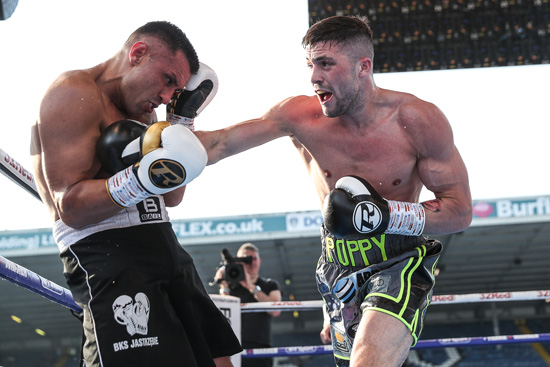 ‘Given what I achieved as an amateur, by 26, I should already be British and Commonwealth champion at the very lowest and this year I’m going to put that right,’ warns Oldham-based ‘Kid Dynamite’, a classy and combustible middleweight who has won 19 straight with 15 early endings.

‘I know how high my level is. In the past, I’ve sparred the likes of Amir Khan, the Murray brothers (John and Joe), Ant Crolla, Hassan N’Dam N’Jikam, Hosea Burton, Callum Johnson and, anyone I’ve sparred, I’ve held my own.

‘I want titles, every title. I’m supposed to be next in line to fight (recently coronated British champion Jason) Welborn but I understand he’s signed for a rematch with Tommy Langford. I’ll take care of him, no problem, then I’ll smash(current Commonwealth king and male model) Liam Cameron up. He’s got a big mouth and he’s ugly. He agreed to fight me but dropped out. Shitbag!

‘That Billy Joe (Saunders, the WBO king) is a tricky customer but I’m not that far off him. I want to be moved pretty quick and Frank Warren (his promoter) is the best at delivering that!’

Ahead of his title debut against Redditch iron man Andrew ‘D’Animal’ Robinson for the WBC International Silver belt in a warm up act to Tyson Fury’s resurrection at the Manchester Arena on Saturday week, the hard and handsome 5ft 11in hope has re-united with Clitheroe trainer Kevin Maree after a short stint with Ricky ‘The Hitman’ Hatton in Hyde.

‘I should never have left Kevin,’ states Heffron, a former English ABA semi-finalist in his teens.

‘At the time, I just didn’t have the money to keep travelling 80 minutes each way to his gym but now I’ve a couple of sponsors. Ricky’s a very busy man and was only in the gym a couple of times a week. I put 100% into this so I need 100% put into me.

‘In the past, I’ve had loads of problems outside of boxing which I don’t really want to go into but they’ve all been fixed now.

‘Earlier in my career, I wasn’t enjoying boxing but now I’m in love with it again. I’m smiling every single day at the gym.  I love chilling with my daughter Poppy who had her first birthday last week but, for this fight, I’ve had to move in with a mate. She was keeping me up at night….and making me go soft!’

Ex Midland Area and IBO Continental king Robinson – beaten just three times in 25 and never stopped – poses easily the stiffest test thus far for a lad long feted as one of the most gifted young prospects nationwide. But talk is tat in the tussle trade and Heffron knows the time has arrived to add some substance to the soundbites.

‘Saturday (week)is my most meaningful pro fight so far and I’m really looking forward to it. ‘I’ve always said better opposition will bring out a better me. You’ll see the best Mark Heffron yet on June 9th,’claims hammer handed Heffron whose 19 starts average less than three rounds each.

‘People around the boxing gyms and on social media know what I’m about but this is the perfect platform for me to get exposure to a wider audience. I’ve already sold over 300 tickets and I’ve just had more sent to me.’

Educated at ‘special’ schools following a delinquent adolescence, fast-maturing Heffron is still to venture beyond round eight – and only completed that trip on one occasion some four years ago. However, he is unperturbed.

‘The possibility of having to go 10 rounds for the first time isn’t a worry,’ says Mark, one of 12 children born into one of Britain’s most famous fighting families.

‘I always train as though it’s for a world title but I have upped my sparring a bit recently. I’m feeling very fit and sharp. I’ve been sparring (unbeaten English super-middle champ) Darryll Williams, a very, very tough man. In my eyes, a lot better than Andrew Robinson,’

‘I’ve watched a little bit of Robinson on You Tube. Technically, he’s not that good but he’s fit, tough, brings a great chin and always comes for a fight. They tell me Robinson’s never been stopped but we heard all that before I mashed Lewis Taylor (rsc7, last November).If I catch anyone clean, they’ll ‘go’…..100%.

‘I’ll take my time and just replicate what I’m producing every day in the gym. This is the fittest, strongest, most mentally focussed I’ve ever felt.

‘You’re definitely gonna witness a special performance. Explosive. Dynamic. First I’ll show my skills off, then I’ll take him out.’