‘MARKSMAN’ AARRON MORGAN: “IF PIGFORD TRIES TO TURN IT INTO HAGLER-HEARNS, HE’S GOING TO SLEEP!” 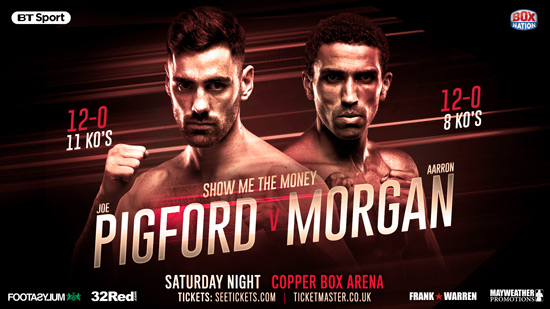 Both present perfect 12 fight slates and between them the potent pair boast 19 stoppage wins. The judges are expected to be redundant.

Earlier this week, 29 year old Morgan, a former London amateur champion, spoke to Glynn Evans about his career thus far, and the carnage he intends to inflict at ‘The Box That Rocks’.

Impressive nickname. What are the origins?
My amateur club mates at the Islington Boys Club dubbed me ‘The Marksman’ because of my accuracy. I always hit the target!

Historically, east London where you were born and raised, has been a hotbed for fighting. Were you a scrapper on the streets and school yard as a kid?
Growing up in Newham and East Ham you had to be able to scrap. I was always a cool, laid back kid – quite popular – but when opportunities arose, I could always defend myself. Before the boxing, I’d done karate and judo for a few years. Mum always taught me: ‘Any one hits you, punch ‘em back twice….and twice as hard!’
Also, I was quite a big kid so wasn’t on the receiving end too often. I weren’t 100-0 on the street but I was a lot better than 50-50!

How did you become involved in boxing? What did you achieve in the amateur code?
I’d been fiddling about with boxing training, trying to get my body into shape throughout my teen years because, at 17, I was about 95, 96 kilos. Blubber boy!  But I never had my first amateur fight until I was 19. All my amateur career was at senior level.

I won about 40 of 50 bouts, captured an ABA novice title, was London ABA champion and made the English Elite (ABA) semis. I also got to a final trial with Team GB but just fell short. My one regret is that I never received an England vest but I boxed all over Europe at club and regional level.

Since debuting as a pro back in November 2013, you’ve quietly racked up a dozen straight wins, off TV, on the small hall circuit. In what ways has your game developed?
Since starting out, my timing and balance have improved and my boxing IQ is a lot better. I now know what to do, when to do it and where I need to position my opponent, to execute. I’m a big thinker in the build-up then, come fight night, hope my intuition kicks in.

Eight of those victories have come by conclusive stoppage (all inside five rounds).  What are your secrets to taking an opponent out?
I’ve always been able to punch. I’m more a sharp, precise hitter than a clubber. I think it’s partly my natural genetic makeup and bone density, partly technical refinements and a big part ‘attitude’.

Repetition helps get the mechanics right but you have to be committed to doing damage. The safest time inside a ring is when the fight is over. The quicker I can make that happen, the better. When I smell blood, I’m a shark!

Do you view Saturday’s shootout with fellow banger Joey Pigford – screened live on BT Sport and BoxNation – as a ‘breakout’ opportunity?
Every fight is important. I know what sacrifices I had to make to get myself to this stage but, from the fans’ perspective, this is definitely my most relevant fight. You want to be in fights where fans are familiar with both boxers. This is what it’s really all about.

It’s a huge platform. I’m very grateful and very excited. I’ve done £20,000 worth of tickets so there can’t be any stage fright!

How have you adjusted your schedule to prepare?
I’m not training longer, just doing more correct things. I’m confident that I can outlast Pigford over however long is needed. I’ve already been eight rounds twice. He’s never been past round six.

I’m an approachable guy, pretty well connected on the circuit , so I can organise sparring with all the top welters and super-welters in the capital, like Bradley Skeete, Gary Corcoran, Larry Ekundayo. I’m more than ready.

What specific challenges does Pigford present?
I’ve done my research on him, and I’m well prepared. With 11 stoppages in 12 wins, even Stevie Wonder could tell you Pigford can dig.

He’ll be taller than me, possibly longer, though I’ve very long arms for my build. I’ll give him the respect that his record demands and I’ll be fully switched on from the first bell.

But, if you list the desired attributes, I tick more boxes than he does and I’m very confident I hit harder.  At stake is bragging rights as the division’s biggest puncher. If he tries to turn it into Hagler-Hearns, he’s going to sleep!

Why do you win?
I believe I’m the better fighter – more fluid and a harder, faster puncher – and that I have the temperament to prove that on the night. I’ll systematically out box him, beat him up, then knock him out.