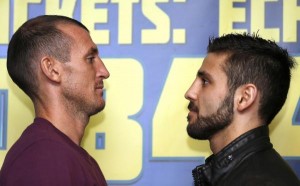 Derry Mathews and Tony Luis are both promising knockouts ahead of their Interim WBA World Lightweight title showdown this Saturday night at the Liverpool Echo Arena, live and exclusive on BoxNation.
Mathews and Luis met head-to-head at The Royle Family actor Ricky Tomlinson’s world famous cabaret club The Green Room and the star was also on hand to support Liverpool’s favourite fighting son.

‘Dirty’ Derry has seen Richar Abril fall out twice, then Ismael Barroso, but says he’s totally focused on Luis and is prepared for whatever he brings to the ring.
“If you can keep you’re head together through what I’ve been through for this fight then nothing will faze from winning the world title,” said Mathews.
“First I’ve prepared from a tricky, long-armed, slick Cuban in Abril, then an explosive punching Venezuelan in Barrosa, and now I’ve got an aggressive come forward fighter in Luis. Out of all of them Luis is probably the best choice and suits me my style down to the ground,”
“He’ll walk straight onto my punches and he won’t be able to take that all night. I see myself taking him out in from the sixth round onwards.”
“The main thing is that I’m still fighting for the world title in my home city. I’m not going to let my fans down, they’ve stuck by me, through not only this, but my whole career and I owe it to them and Liverpool.”
“Lightning” Luis, from Ontario, Canada, was due to defend his WBC Continental America title this Saturday night in the US, but instead took this fantastic opportunity to win the Interim WBA World title and says he will capitalise on it.
“It was an opportunity that I just couldn’t turn down,” Said Luis.
“I’m here to shock Liverpool and Great Britain with a knockout performance and everyone will have the name Tony Luis on their lips afterwards,”
“I’m fit and ready to fight, I had my fight lined up for this Saturday in America so I’m spot on with my weight, the jet lag isn’t bothering me at all and I’m just looking forward to rolling on Saturday night,”
“Mathew’s is the home town kid and he’ll have the fans behind him, but I’m here to do my job and I intend on finishing him off early and getting home,”
Big fight fan Tomlinson is looking forward to Saturday night and says Mathews can bring the title to the boxing mad city.
“I can’t wait to see Derry in this one,” Said Tomlinson.
“Liverpool’s a great sporting city with the football and boxing and we get behind our sportsmen and women in whatever they do. Liverpool will get behind Derry this Saturday night and support him in the biggest night of his career,”
“This kid from Canada, Luis, I tip my hat off to him for taking the fight and coming over to fight Derry in his backyard. He fancies his chances and it’ll be a great fight, but with the crowd behind our man, I can only see one winner and that’s Derry.”
Tickets are available from the Liverpool Echo Arena Box Office on 0844 8000 400 or echoarena.com and Eventim on 0844 249 1000 or eventim.co.uk
BoxNation will televise live and exclusive on Sky 437/HD 490, Virgin 546 and Talk Talk 525. Subscribe at www.boxnation.com Or watch online at Livesport.tv and via iPhone, iPad or Android.