MATHEWS ON FLANAGAN: I WANT TO HURT HIM AND STOP HIM

Merseyside’s media packed into the Derry Mathew’s Boxing Academy yesterday to watch the Liverpool hero take his anger out on the bags ahead of his mouth-watering all-British world title showdown with Mancunian rival Terry Flanagan. 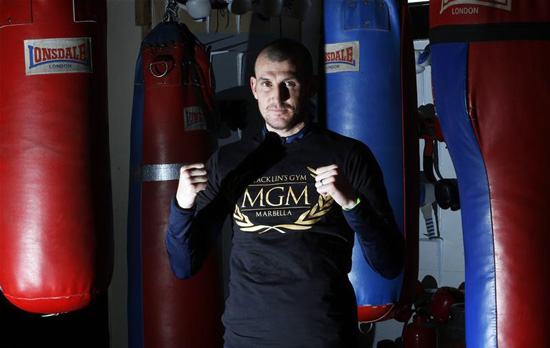 The bitter North West foes will fight it out for the WBO World Lightweight belt at the Liverpool Echo Arena on Saturday 12th March, live and exclusive on BoxNation.

Derry was left angry and frustrated last week after Manchester’s Flanagan was forced to push the fight date back due to severe tendonitis in his left foot that left him unable to train.

Rather than dwelling on things Derry is now focusing on mentally and physically preparing himself for the new date; kicking things off with an impressive display for the cameras.

He said: “It’s my 50th fight in my own city, it doesn’t get much bigger than this. The delay was frustrating but now it’s all about being professional and getting on with it. He’s hasn’t faced anyone like me in a long time and I’ll be causing him problems all night; I want to hurt him and I want to stop him.”

Boasting an impressive record of 38 career wins with 20 stoppages, Mathews is as experienced as they come and wants to use his knowledge to help develop a new generation of future champions. The 32 year-old says nothing in life gives him more pleasure than helping the youth of Liverpool break into boxing.

“Some days when I’m not in camp I’ll be in here from eight in the morning to eight at night. I love coaching in the community and passing on my wisdom at schools and clubs. I like being around people and helping them so it’s good to get as many people down here as possible to see what we do,” said Mathews.

“We’ve got 40 kids coming here three nights a week and they absolutely love it! Boxing is thriving in Liverpool these days and I’m doing my best inside and outside of the ring to make sure we keep flying the flag for English boxing. It gives me great pride knowing I’m doing my bit to help out, if I change just one kids life for the better I’ll be a happy man.”

Derry’s massive showdown with Flanagan will be the 50th bout of his glittering professional career but the Scouser still vividly remembers where it all began for him all those years ago. Like many of the children who attend his popular classes, Derry’s boxing life started out at his local boxing club.

He explained: “I lived next door to a boxing club and we had no youth club in our area so the gym became our local hangout. I caught the bug from the age of eight and never looked back; becoming a world champion has always been my dream and on March 12th I’m going to fulfil it. It’s important to remember your roots and give something back to the community,”

“We train some of the kids who come along to my academy from the age of four; we’ve got a really good bunch of kids here and there’s some real talent amongst them. We’ve got four coaches on our books at the moment who have all done their coaching badges so we’re in a really good place, I’d absolutely love it if my gym produced a future world champion!”