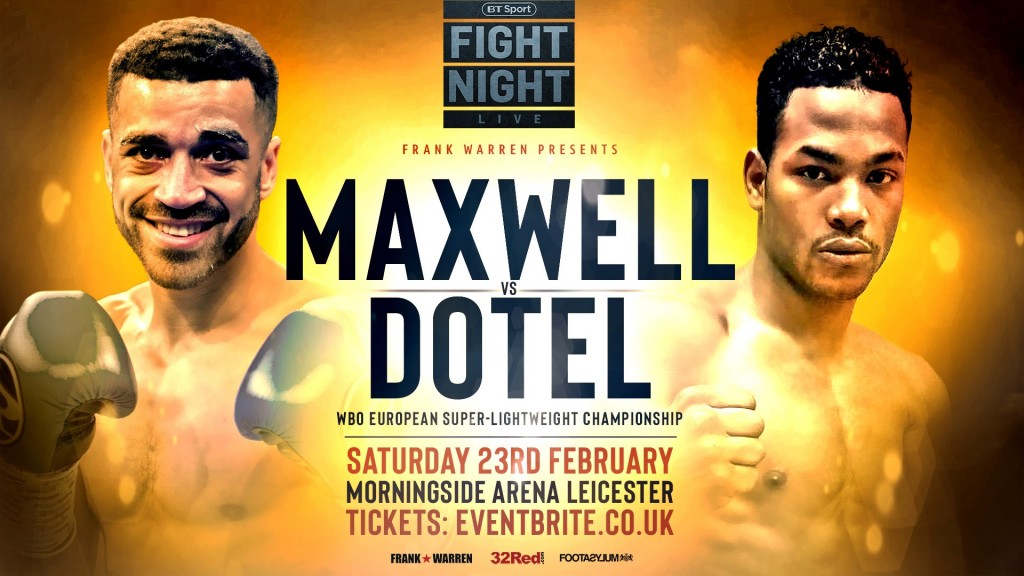 SAM MAXWELL WILL seek to win his first professional title in Leicester on February 23 when he fights Kelvin Dotel for the WBO European super lightweight title.

The 10-0 (8 KOs) former Team GB member from Liverpool has been promising a big 2019 and he launches his campaign at the Morningside Arena on a bill also featuring Anthony Yarde taking on Travis Reeves with the WBO Intercontinental light heavyweight title at stake, as well as British super featherweight champion Sam Bowen returning after an impressive stoppage win last time out at the arena.

The Spaniard Dotel holds a record of 14-4 (7 KOs), having won the Spanish welterweight title in 2015 and the IBF International title in 2018. In his last fight in December he defeated the then 18-0 Mishiko Beselia via a sixth round stoppage.

For Maxwell, 30, winning the WBO belt is first and foremost in his ambitions for the year ahead.

“Yeah definitely, it is a massive title and a massive opportunity for me that I am looking forward to,” reacted Maxwell, who now trains in Glasgow under trainer Danny Vaughan.

“I think it is perfect timing for me because I am peaking and I aimed for this to be my year.

“It is when I wanted a shot and it has been delivered to me.

“From Dotel’s record he has boxed at a higher level than me and in his last fight he beat an undefeated opponent. I have watched a few videos of him and he is a good all-round boxer who looks like he has got a bit of power as well. So it should be a good fight,” he added, knowing full well that recent history has provided evidence of the dangers of overlooking Spanish fighters operating at European level.

“Definitely, I always look at it as if they come from Spain or France they are usually very respectable opponents and I will have to be at my best – and I’m going to be.”

Maxwell has linked himself to a potential showdown with Ohara Davies and the Hackney man responded on ‘The Boxing Podcast’ by reasoning that he needs to prove himself a contender before he would entertain stepping in the ring.

Maxwell has no argument with this train of thought and intends on making a start by collecting his first belt, live on BT Sport.

“Those comments make sense because I am just a 10-0 opponent at the moment and not really on his radar. If I perform as well as I know I can and win this title, I’ll start pricking some ears up and people will start taking an interest in me.