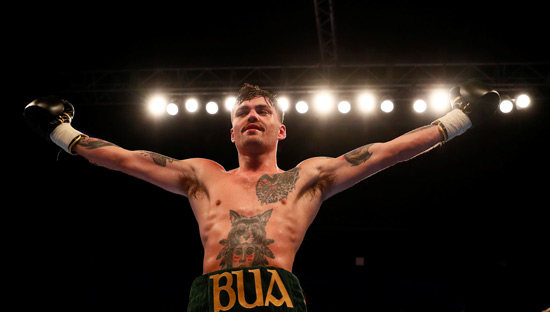 He challenges for Catterall’s WBO Intercontinental Super-Lightweight crown at Belfast’s SSE Arena on Saturday in a ﬁght where Frampton must be dreading which side to support.

The two-weight world champion is a close friend of McKenna and trains alongside Catterall at their trainer Jamie Moore’s gym on the outskirts of Manchester.

McKenna, 28, said: “Carl was actually supposed to walk me out to the ring for the ﬁght when Phil was the opponent, but that has changed. I wouldn’t want Carl in an awkward position.

“I was going to ﬁght Tommy Coyle before and he was in camp with Carl. I always seem to be ﬁghting friends or friends of friends. Everyone in boxing seems to know each other.

“I would never put Carl in the position where he talks about one of his gym mates. I wouldn’t like him to ﬁght one of my team mates and ask about them.

“There is a line which you never cross during camp and I would never ask Carl, ‘How is Jack getting on in sparring? How is he doing with his weight?’

“I wouldn’t expect him to say to Jack what he knows about me and he wouldn’t get involved in that. There has to be respect.”

McKenna who is unbeaten in 17 ﬁghts has seen his proﬁle grow in the last 12 months and the 6ft 1in southpaw believes his popularity will mushroom after this weekend’s ﬁght that has captured the imagination.

Tyrone who outpointed Anthony Upton in his last ﬁght added: “My last six ﬁghts have been on TV and I have a big fan base now.

“I have never taken an easy ﬁght or turned down a ﬁght. I was offered Jack when Phil pulled out and straight away I said, ’Yes’”.

There is an all Dublin rematch when Jono Carroll defends his IBF intercontinental super featherweight crown against Declan Geraghty.

When they met in November 2014, Geraghty was ahead before he was disqualiﬁed in the fourth round. In a clash of unbeaten hopefuls,