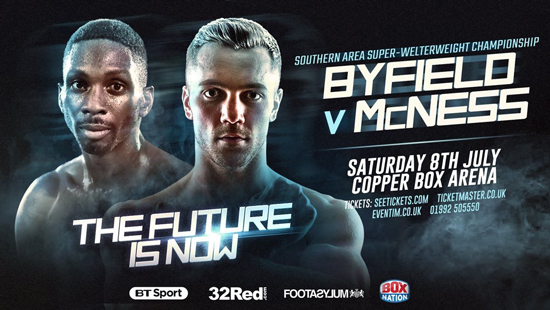 Sam McNess is out to prove he is no daddy’s boy by hammering “deluded” rival Asinia Byfield on ‘The Future Is Now’ bill at London’s Copper Box Arena on Saturday night.

The West Ham nut will be bidding to rip the Southern Area Super-Welterweight title from the Champion, just steps from his beloved club’s home ground.

Reading’s Byfield has riled undefeated McNess by claiming his challenger is getting the hype because of his dad, Steve, a former top amateur and then a professional.

Angry McNess said: “I read an article with him saying that I had been fed a silver spoon on the tail of my dad. Byfield’s deluded to be honest.

“I am not being fed from a silver spoon. I earned my way onto these shows because I had a long, successful amateur career.

“I deserve to be boxing on these big Frank Warren shows.

“I respected everything my dad did, but I am fighting for a professional title and he never fought for one so I am not trading on what he did.

“I used to be frustrated over it when I was a young boy. I would read the local newspaper and it would say, ‘following in Steve’s footsteps’, but I’m on my own journey.

“I like them mentioning dad because a lot of people tell me he was a good fighter, but after this fight people wont keep bringing dad up.”

McNess, 25, has had just seven professional fights and insists it is no gamble by contesting a title so early in his career.

McNess explained: “We were offered the fight, my trainer Mark Tibbs had a little look at Byfield and was confident I would win.

“I’ve been fighting a lot of journeymen, but I want a test. Someone who is there to win because that will bring the best out of me.

“I haven’t shown what I am about, but Byfield will come to win so you will see the best of me. I am confident in my ability and that I will do a good job on Saturday night.”