Picking a winner for the top of the bill clash at the Xmas Cracker in Manchester next Saturday has puzzled boxers, pundits and fans alike, swinging back and forth between the power possessed by champion Andy Lee and the skill and stealth of challenger Billy Joe Saunders. 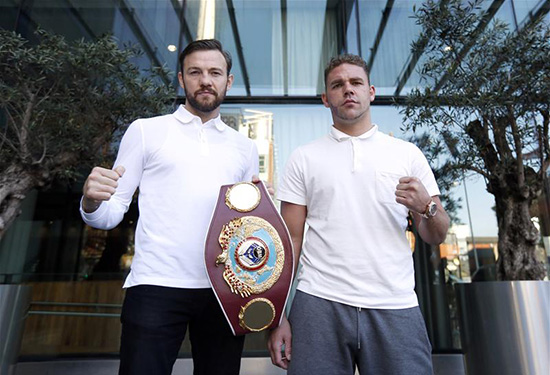 However among the supporting cast Tom Stalker has little hesitation nailing his colours to the Saunders mast, while Paul Butler also plumps for the Hatfield man after acknowledging the 50-50 nature of the coming together for the WBO world middleweight title and some careful deliberation.

Stalker suspects brain will prevail over brawn. “I think Andy Lee is a terrific fighter but I just think Billy Joe has too much of a boxing brain for him.” He says. “Billy Joe has been over in Spain with us and, seeing him in the gym, he is brilliant. I can just see him winning and out-boxing Andy.

”Lee has been, I won’t say lucky, but in a few of his fights he could have been getting beat and he’s chinned them. Fair play to be able to knock someone out when you are getting beat but Billy Joe will be too switched on and it won’t happen to him.

“Billy Joe on points for me.”

Butler believes it will be a case of who is quickest out of the blocks on the night, with Saunders normally a sharp-shooter in the opening exchanges, while Lee can be a little sluggish at the off.

“I’m completely torn on it,” admits the former world bantamweight champion. “I think it is all about how Andy Lee starts the fight because he knows Billy Joe starts fast and he normally starts slow.

“I think it will be hard for him to catch up later on in the fight,” reasons the 27-year-old, who feels being the younger, fresher fighter equals Advantage Saunders.

“It is going to play a big part in the fight but I think a lot of it will come down to both their amateur pedigrees as well because it is going to be a top-class boxing match. Everyone knows they are not going to stand in the middle of the ring and scrap it out. They were both in the Olympics, but it is who wants it that little bit more.”

The M62 derby theme has been played out in the build-up with Smith and Kelly donning the jerseys of Liverpool and Manchester United respectively. If he didn’t get his kicks out of punching, Butler might well have ended up pulling on the shirt of Liverpool for real had he not declined the offer of a trial period at the club’s Academy.

“I always played football first,” he recalls. “I used to play football and I’d just started my boxing when a scout asked my dad to bring me up. I remember my dad sitting me down in the living room saying he wanted me to go up to training but if I do they don’t like you doing other contact sports because of injuries. I said I didn’t want to go and I am staying boxing.

“I still play and I am pretty decent – plenty of goals! I play as a last-man striker so I am never in many big challenges where I might get injured so I am pretty lucky.”

While he awaits news of who, when and where he will fight next, Amir Khan has again immersed himself in a charitable deeds, this time leading a joint operation with his Foundation and humanitarian charity Penny Appeal to provide moral and practical support to those affected by the recent flooding in Cumbria.

The two-time world champion yesterday led volunteers from both organisations in visiting Carlisle and the surrounding area, donning on a different type of gloves to help out clearing up following the destruction caused by Storm Desmond.

Teams are also visiting the affected communities to show their support and distribute hot meals to those families devastated by the flooding.

Says Amir: “The UK community has been so supportive of me and this is just a small way I can give back. Once the flood water disappears, the hard work really starts, as families, most with children, return to severely damaged homes and destroyed possessions.

“Many are still without electricity and heating – so I’m proud to be going with Penny Appeal and our dedicated volunteers to help in every way that we can. It’s important that we come together, as British people do at times like this, and remind those affected that they’re not alone in dealing with this crisis.”

Amir, always one of the first sporting celebs to muck in at the time of crisis with more than just words, at home or overseas, has previously worked with Penny Appeal, supplying hot meals to homeless people in Manchester. Good on him.

Isn’t it time he was he was given a gong in the Honours List?

A match for macho Fury?

The Tyson Fury furore even reared its ugly head on the BBC’s Question Time last week with political pundits debating whether or not the controversially-opinionated new world heavyweight champion should remain on the SPOTY awards list.

The panel gave a split decision but the most apposite response came from the Daily Mail’s witty sketch writer Quentin Letts, who declared: ”I’d keep him on because I want to see the punch-up between him and Clare Balding at the end – and I’d back Balding to win!”

It is as easy now to get steroids as it is going to a shop to buy a can of Coke.

A woman’s best place is in the kitchen and on her back, that’s my personal belief.

So says Tyson Fury. Sexist? Him?

Tyson has said he wants 10 kids and I’d be happy with that. God willing we’ll get as many as God gives us.”

Mrs Paris Fury, who also revealed they did not sleep together until they were wed.

You cannot be a dickhead and win Sports Personality of the Year.