MEXICANS OUT ON THE BASH 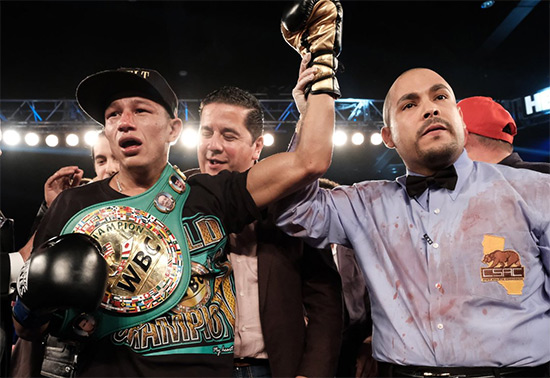 BoxNation viewers were treated to an all-Mexican slugfest in the early hours of Sunday morning, a brutal affair that saw a first defeat inflicted on Francisco Vargas, who was relieved of his WBC world super featherweight title.

The man now in possession of the belt is a familiar face to us. It was Miguel Berchelt, who last year clinically dispatched George Jupp to the canvas after the Belvedere boy had given a good account of himself in what was a short-notice challenge for the WBO interim title.

You could see then that Berchelt had something about him, as Vargas also quickly discovered at the Fantasy Springs Casino in Indio, California. The unbeaten champion was rocked on several occasions in the first half of the fight, before the older man showed his class and really made a fight of it down the stretch.

In the end he could absorb no more and was stopped on his feet in the 11th.

There was a lot of hype surrounding Gervonta Davis the other week following his destruction of Jose Pedraza in New York and the super featherweight division now has two new world champions who adopt a no holds barred approach.

A fight between the pair probably wouldn’t be one for the purists, but I suspect it would be one hell of a scrap.

Before Davis can entertain any thoughts of getting it on with Berchelt he has business to deal with first – complex business.

He is tasked – also mandated by the IBF – with fathoming a way of unpicking the defences of one of the fight game’s smartest cookies.

Much as he might want to on occasions, Liam Walsh won’t simply stand there and have a tear-up. Trading blows for the sake of it is not his thing – his corner of his two brothers and trainer Graham Everett wouldn’t allow it.

Liam’s skill set revolves around breaking his opponents down and making them miss until tiredness sets in and they leave themselves open. Then he gets to work and goes for the finish.

Davis is clearly a big talent, but he won’t have come up against such a tricky customer as Liam before and I suspect it will prove a shock to his system.

It is a fight I back my man to win in a decisive fashion and when he claims a first world title belt, I know he possesses a strong desire to operate at the highest level and in no way would back away from Berchelt.

Liam has served his time, beaten everyone put in front of him and is now more than ready for a tilt at the top boys.

The quiet man from Cromer doesn’t crave attention in any way, shape or form, but I suspect his name will be up in lights in the very near future.

Another standout performance at the weekend was delivered by Mikey Garcia. In his second fight of his second coming, he ended the reign of WBC world lightweight champion Dejan Zlaticanin to win a world title at a third different weight.

After dominating the early exchanges, Garcia literally pole axed the poor Montenegrin and put a big marker down in the process.

The likes of Terry Flanagan, Jorge Linares and Anthony Crolla will be carefully watching out for his next move because, if he remains at the weight, they are sure to be on the radar of the now 36-0 man.

From our side, I would be happy to make the match with Terry and it is a top fight there for the making. With Terry being a 32-0 world champion, something would have to give and it is the sort of challenge Terry would relish, however tough it might prove to be.

However, as much as Garcia has previously stated how much the WBO belt means to him, I have a hunch that a mega-money clash with Vasyl Lomachenko might well be in the offing as this would carry huge appeal to the US pay-per-view paymasters.

Either way, the lightweight division now has a new spark and will continue to illuminate.

Unfortunately Carl Frampton came up a little short in his return against Leo Santa Cruz in Las Vegas. When you operate at the highest level, defeat can happen and the Belfast man still remains firmly in the picture.

Santa Cruz is a classy fighter who had the ability to adapt to the threat posed by Frampton. He clearly had the savvy to learn from his defeat in New York and successfully switched tactics.

I do hope we haven’t seen the best of Frampton and that he gets the chance to reclaim his throne later this year. He admits he was double bluffed by the canny Californian and it is to be hoped he doesn’t now have Frampton’s number if the pair get to complete their trilogy.

I’ve always thought Frampton is a fine young man and I admire the way he took defeat so gracefully, even though one judge made it a draw, which I thought was ridiculous.

It was heartening to see such decent sportsmanship from the Ulsterman. In fact, it was rather a good weekend for that old fashioned word, one which is not heard so much in sport these days.

When Roger Federer won his 18th Grand Slam in the Australian Open, virtually the first thing he did was to embrace Rafael Nadal and say what a great opponent he was and how he wished he could share the trophy with him.

Respect is a courtesy displayed on a regular basis in the ring and it is good to see the word is spreading.