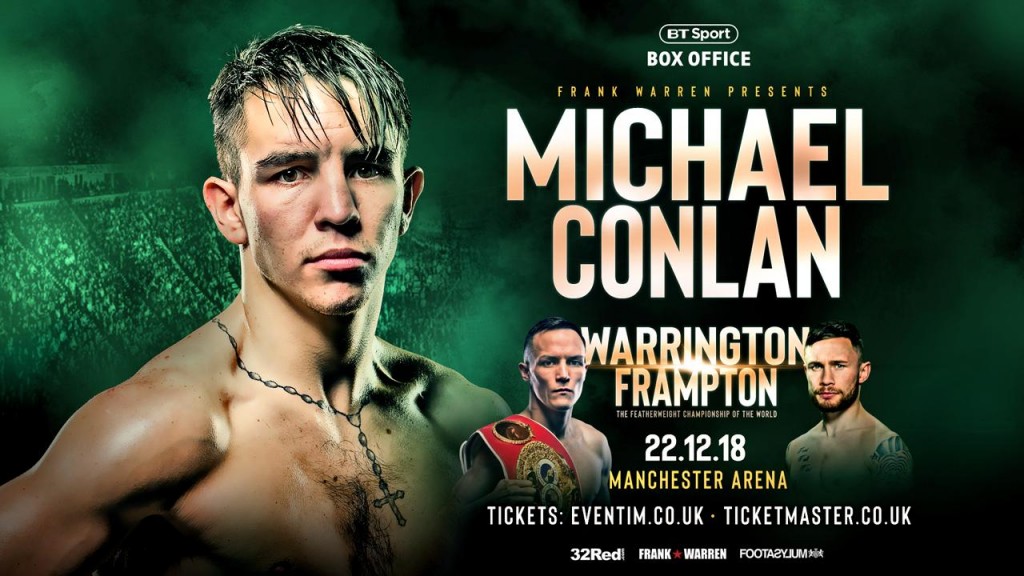 The Belfast side of the blockbuster Manchester Arena show headlined by the IBF world featherweight title showdown between Josh Warrington and Carl Frampton has been strengthened by the addition of unbeaten fellow featherweight star Michael Conlan to the bill.

The blue-chip prospect and former world amateur champion will have his tenth professional fight in Manchester, live and exclusive on BT Sport Box Office in the UK.

Conlan said: “I am really excited to be fighting on the same card as my stablemate and friend, Carl Frampton. I am looking to step up in class and reach 10-0 as a pro by Christmas. The Conlan Revolution rolls into Manchester!”

In his hugely successful amateur career, Conlan was ranked No.1 in the AIBA world rankings at bantamweight with a medal haul that included an Olympic bronze medal (London 2012), Commonwealth Games gold (Glasgow 2014), European Championships gold (Samokov, Bulgaria 2015) and a World Championships gold (Doha 2015). He achieved superstar status in his homeland as one of Ireland’s most decorated amateur fighters of all time.

Since turning professional in the wake of a controversial exit from the 2016 Rio Olympics, Conlan has clocked up nine straight wins, with six of them coming inside the distance.

.The 26-year-old made his debut as the headliner at the Madison Square Garden Theater where, after being walked to the ring by Irish MMA superstar Conor McGregor, he outclassed Tim Ibarra to get his pro journey underway.

He has since boxed in Chicago, Brisbane, Tucson and a further two times at the MSG Theater, before getting to perform in the main arena at the Garden against Ibon Larrinaga in May.

The following month he enjoyed a homecoming fight and a significant step up in class against Adeilson Dos Santos at the SSE Arena in Belfast, where he was victorious over the eight-round distance. Just last Saturday, at the Park Theater in Las Vegas, Conlan stopped the normally durable Nicola Cipolletta in the seventh round.