Miles better after Shinkwin has to grin and bear it

After a six-week stint in Big Bear spent realising optimum fighting condition, Miles Shinkwin turned more Grisly Bear when he discovered to his Harrow horror that his challenge for the English light-heavyweight title was aborted. 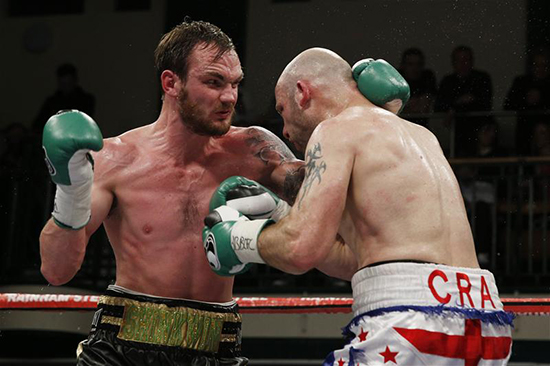 The Bushey bruiser was set to contest the strap against champion Travis Dickinson as part of the October 30 card at the Harrow Leisure Centre and will still form part of the chief support to super-middleweight Jamie Cox defending his WBO European title, but the withdrawal of the champion with a sore back clearly remains a sore point for the 27-year-old.

Such was his frustration, the fight literally drained out of him as illness then took over and training was halted for a two-week period. Not that he was able to wallow for too long as sympathy was in short supply from Mrs Shinkwin on the home front.

The 11-0 former Southern Area champion departed these shores for California on July 12 to take on the role of training and sparring partner for George Groves ahead of his September world title tilt against Badou Jack in Las Vegas.

He was soon elated to be informed that the hard yards would be for mutual benefit when news came through that purse bids for his own title challenge had been won and a date set for the duel with Dickinson.

“I didn’t care where the fight was because I was going to win – just as long as I had the date,” reflected the fighter, who also experienced a similar camp in Monaco with Andy Lee in February. “Finding out we won the purse bid was great, knowing the promoters have a bit of faith to get the show for you. We then got the date and it all fell into place nicely.

“When I got back and got the call to say he had pulled out it knocked me sideways and I was ill for two weeks, it deflated me, took everything out of me. I just trained so hard for that fight, I was under no illusions that he was my hardest fight to date.

“Whether people want to read too much into it or not, I beat him as an amateur, so the amateur-pro rivalry was there and I knew he would be up for it and train hard. Getting told it wasn’t on absolutely killed me, I tried to train on and flush it out of me, but it got worse and worse.

“I think it was psychological, looking back, but my missus is the least sympathetic and is one of these ‘get on with it’ people who is never ill. She doesn’t understand how hard training is, she thinks I just go and punch a couple of bags and get paid for it. She was saying ‘go training, get through it’.

“Then we got a phone call saying would I fight Bob Ajisafe for the British title and I went through the roof, back up again, excited about fighting for the championship, but on Tuesday I found out he didn’t want it.”

“I was back down again, it was like a roller-coaster, just for one fight and I’d been in the gym since July 12 – nearly four months.”

It is a side of boxing punters don’t see, the gamut of emotions fighters endure when they are awaiting dates and seeking opponents at a level that will progress their careers and potentially put belts round waists. A sickener for Shinkwin was just how ready he was after six weeks of elite-level training at altitude, but he maintains the conditioning will serve him well and his next opponent will suffer.

“The mountain run in Big Bear was like nothing in my life! We did a mile uphill sprint and it was like I had someone in my stomach pulling my heart and lungs out – it was that bad!

“Since I’ve been back I’ve been in 10-12 round spars and it’s been a breeze. It’s an old cliche and every fighter says it, but I’ve been lifting heavier weights, running faster times, doing more rounds and looking better doing them. I haven’t boxed for six months and, while a lot of fighters would moan about that, I think it’s been a blessing. I’ve come on so much in that time, but I’ve not shown no-one that, which means people around me aren’t seeing what I’m doing.

“Now on the 30th of October people are going to see it and think ‘I don’t want to fight him’, that’s for sure.”

Unfortunately, the American adventure did not end well for Groves, who was narrowly outpointed by Jack after being floored in the opening round. Shinkwin shared his friend’s pain and believes the early setback cost him dearly.

“I’ve known George for 15 years, we’ve roomed together on the England squad and we’ve always kept in touch. He is a real good pal and I was gutted for him, I really was. I saw what he put in, money-wise as well, and it was a lot of money, time and effort. He was out there for nine weeks away from his wife – I only had six away from mine and that hurt me enough. 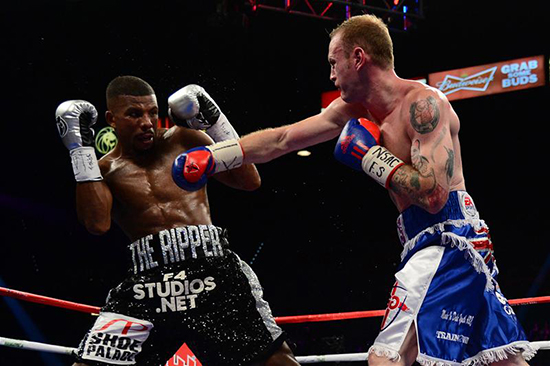 “To lose the way he lost, without one punch in the first round he wins the fight, it just changed everything. The geezer was petrified of him in the first and then he put George down and just grew straight away. He was better than I and everyone thought, he was so awkward.

“I thought a draw would have been a fair result. I’m the least biased person I know and I thought he nicked it by a round, but in my heart I thought they would never give it to him by a round and he would get a draw here.

“It wasn’t the same Groves that boxed Froch for nine rounds, if that Groves had turned up it would have been a different fight altogether.”

There is an intriguing potential bout in the making for Shinkwin himself in the not too distant future, with a foe he is currently pretty familiar with.

With there being a fairly small circle of British light-heavies on the circuit, Shinkwin has shared considerable rounds sparring in preparation for Harrow with Tom Baker at the West Ham gym. Baker also features on the bill, taking on Jack Morris for the vacant Southern Area strap.

“We’ve heard it might be made for the next fight,” revealed Shinkwin. “I don’t call names out and anyone who boxes deserves respect. Tom is a nice fella, a good fighter, and he said to me a little while ago they would try and make it.

“I will fight anyone, I’m that type of person and I feel, apart from (Nathan) Cleverly, I am the best light-heavy in Britain now. I have no problems fighting anyone,” he added, before questioning the logic of the British champion Ajisafe not currently being willing to put it on the line against British opponents.

“British champion who doesn’t want to fight British opponents seems strange. There’s a group of lads around my age who all have good records and Ajisafe is one above that and is the British champion. He is probably thinking he is one fight away from a European, possibly a fringe world title, so why risk it? My argument is vacate it and let us fight for it. I’d be more than happy to do a little ‘Super Six’ thing for the title because it would bring regular fights, more exposure and a British title out of it.”

Shinkwin hails from a boxing family, with his grandad having boxed in the Navy, his father and three of his six brothers turned pro, while ten of his cousins also took up the sport. However, it was purely a case of boredom waiting around for his dad that resulted another Shinkwin gloving up.

“Everyone might think we were forced to do it, but I certainly wasn’t,” he recalled. “My mum worked nights, so my nan used to look after my sisters and I used to go to the gym with my dad when he was pro. I used to sit and watch and my dad said you can either watch and be bored or you can punch that bag. 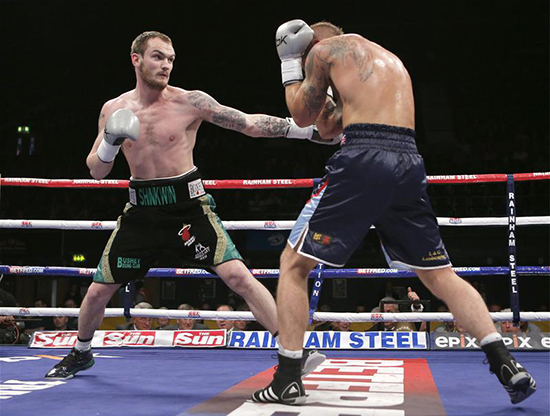 “I had my first spar when I was three, but I used to cry my eyes out going to the gym because I used to hate it, but had to go because my mum wasn’t in the house. In the end I fell in love with it.”

After an amateur career where Shinkwin himself admits dedication was occasionally lacking, he turned professional in 2012 under the tutelage of trainer Jason Rowland, grinding out early points victories over stubborn journeymen determined not to be felled by a young upstart.

Five of his last seven contests have ended via KO, suggesting increased punching potency is brewing and more early nights could well be on the cards.

“I turned pro with the wrong attitude in that I won fights as an amateur in a certain way and thought I would win as a pro in that way,” he conceded. “It took me a while to come round to the way Jason had for me and how he wanted me to look.

“I got out of the ring last week after a spar and Jason was grinning at me. I said ‘what are you grinning at?’ and he said ‘you are becoming the fighter I hoped you’d be’, which was nice to hear and that is reflected in the knockouts.

“We work a lot on power and strength, but early on the journeymen are hard to crack out of their shell because they don’t want to get stopped. I did learn and I got rounds out of it, but when I stepped up and people were trying to win, they got knocked out.”

Whoever steps out of the opposite corner in Harrow, you have been warned.