MILES SHINKWIN: “I WANT TO BE IN FIGHTS THAT BREATHE LIFE BACK INTO THE LIGHT-HEAVY DIVISION.”

Expect Bushey light-heavy Miles Shinkwin to expend his frustrations in a violent manner when he tops the bill at Harrow Leisure Centre this Friday. 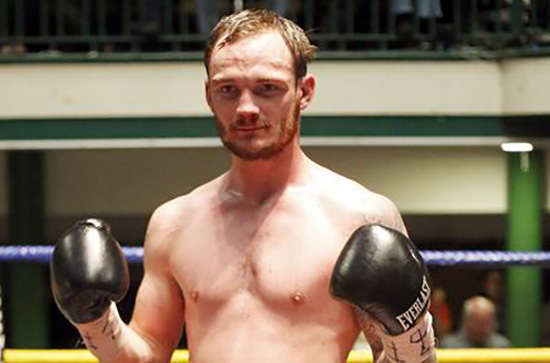 The unbeaten ex four time national junior champion was primed to challenge English champ and ex amateur victim Travis Dickinson but the man from Birtley bailed out with a bad back and now Hungarian banger Daniel Bilisanszki is set to incur his wrath.

‘I’m now at a stage where my fans want to see me with major belts around my waist,’ says the 27 year old from the famous Hertfordshire fighting family who has won 11 straight and stopped five of his last seven.

‘Everyone knows I never want to be the loud mouth but it’s getting stupid. It’s not that (reigning British and Commonwealth champ) Bob Ajisafe doesn’t want to fight me, he doesn’t seem to fight anybody… other than easy bums.

‘When I heard the news about Dickinson , I was actually ill for two weeks with deflation. I’d been flying in the gym, so up for it.

‘‘I just want to be in big fights, entertaining fights, that can breathe some life back into the British light-heavy division.

‘So far, I’ve never entered the ring first, never been a challenger. I crave the experience of going in as underdog.

‘Hopefully Travis and me can go in again in December. When I beat him in the amateurs, it was a huge thing cos he’d just beaten George Groves. When I come through that hopefully Ajisafe will have abdicated and myself and someone else can fight for the vacant British.’

Title gigs apart, it has been a prosperous period for the likeable Jason Rowland coached-Richard Clark managed contender who has improved beyond recognition since forfeiting his job as a heating engineer last November.

‘It’s been hard on the money side. At my level, we don’t get loads and I’ve got a wife and daughter to provide for and bills to pay. In fact it’s costing me money with the aim to being in a far better situation financially sometime soon. But boxing’s what I’m good at,’ concedes Mighty Miles who captured the Southern Area belt by schooling Joel McIntyre in July 2014, then retained it by ripping through Harlow hard man Richard Horton in six rounds last March.

‘And I’ve been quite lucky with the sparring I’ve had this year. I’ve helped (WBO middleweight boss) Andy Lee in Monaco, ahead of the Quillin fight in February and this summer I spent six weeks in Big Bear, California with George Groves ahead of his world title challenge to Badou Jack.

‘As Jason and I are both relatively new to the game, we’re flexible to new ideas. George and I might be the same age but he’s at a far more advanced stage and there’s so much I can learn. He trains phenomenally hard and eats like a monk. 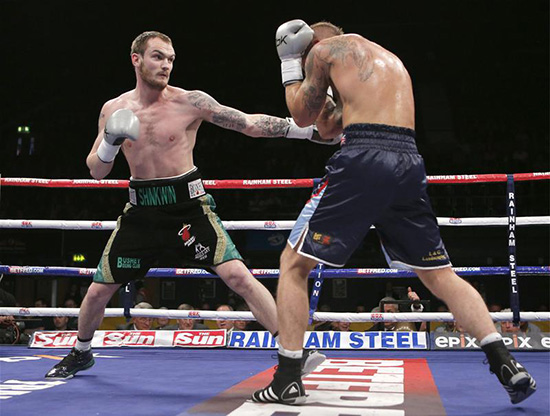 ‘Though we’ve been friends for 15 years, we have hard rounds. If you don’t learn quick, you get hurt. With gloves on, we’re enemies…how it should be.

‘The real tough part was being away from my baby daughter. Now I’m home, I like to spend every possible minute with her. I’ve even lost my bug for golf!’

Opportunity will surely come knocking in the new year if the Shinkwin can mangle the heavy handed 19 year old Magyar in a scheduled 10 rounder before his Hertfordshire faithful in Friday’s bill topper.

‘To be honest, I’ve always viewed myself as the main event for every promotion. I’ve always felt compelled to put on a real show for my fans so headlining isn’t really any different,’ he says.

‘It’s a bit of a no win. If I blast him out, he was a bum, if I go a few rounds and showcase what I’ve been working on, I’m a bum! At this stage, it’s imperative I continually keep my body in the best possible shape and I win at all costs to keep the ball rolling.’

Whilst English, British and Commonwealth belts stagnate, the ambitious sharpshooter has started to cast an eye towards continental titlist Igor Mikhalkin of Russia, another left hander.

He comments: ‘I’ve not actually seen him and anyone who says they enjoy fighting southpaws is lying. But from spars and the progress I’ve made over the last six months or so, I guarantee I wouldn’t be disgraced. I’m not world class yet but I’ll get there soon.

‘Similarly, I’d jump at a shot at (WBA boss) Juergen Braehmer if it was offered. He’s a bad night for anyone, very strong and effective but, unlike Kovalev or Stevenson, he’d not cave my head in!’

Short term, a more plausible match-up would be the mooted Southern Area defence against Chingford starlet Tom Baker which would certainly titillate the taste buds of the capital’s fight fans.

‘I’ve big respect for Tom and his team but we’d take that fight in a heartbeat,’ he claims.

‘Tom’s an unbeaten Frank Warren fighter like myself and a showdown between us would generate good publicity. But I don’t think his lot would take it. They know it’s a fight that they can’t win.

‘Take Nathan Cleverly out of the equation and there’s about half a dozen British light-heavies with similar records who believe we’re the best so let’s fight it out. I believe I’m best and just need the fights to prove it.’