‘MILLWALL JOHNNY’ GARTON: “MY FANS GET ME REVVED UP AND I CAN’T STOP CHUCKING WINDMILLS!” 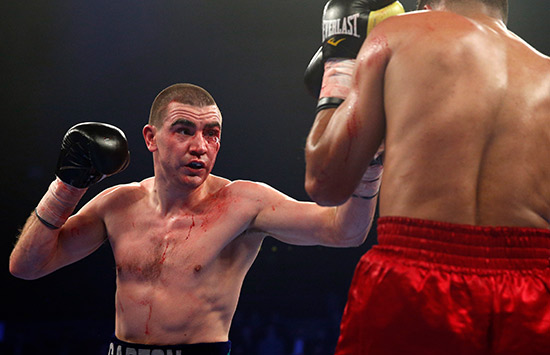 Life on a council estate in the notorious south London ward of Peckham plus an unflinching allegiance to Millwall Football Club were never likely to make Johnny Garton a stranger to fisticuffs.

The 31 year old welterweight’s thirst for a royal rumble has already brought him Southern Area, English and IBF European professional titles plus status as one of biggest ticket sellers in the capital.

‘Me and my sister were raised by a single parent, my mum, on the Clifton Estate just off the Queens Road. Like everybody in Peckham, we were brought up to ‘give it back’ as soon as anybody started on us and naturally I had my share of scraps,’concedes ‘The Pexican’ who came from behind to mow down Moldova’s Mihail Orlov in round 10 of a thriller for the continental strap at London’s Copper Box Arena last December.

‘Though I was quite a laidback kid, if I lost my temper everybody knew about it. Let’s just say not many started on me. Growing into my teens, we had plenty of rucks with the other estates around our way. That’s just the way it was.’

Nevertheless, the south London scuffler was well into his late teens before he first laced the gloves up.

He explains: ‘My older cousin Benny May was an excellent amateur – a multiple national champion – and I’ve been interested in boxing since my granddad used to take me to watch Benny’s bouts.

‘I started work at 15, was eating crappy junk food and a regular down the boozer long before I was legally entitled to be so, aged 18, I started to go to the Lynn amateur boxing gym just to shift a bit of weight.

‘I was already 19 when I had the first of my 35 senior amateur bouts but I won 25 of them and twice made the London ABA final, losing on points both times. I also represented London against Dublin.’

Debuting for dough back in October 2011, Garton’s insatiable thirst for a ‘tear-up’ and his high standing among the terrace faithful ensured he enjoyed huge and fanatical support within the London small hall scene long before any title belts were clasped around his midriff.

‘The Den (Millwall’s stadium) is literally a five minute walk from the house I grew up in and I’ve been Millwall for as long as I can remember,’ says jovial Johnny who is coached by Al Smith at the upwardly mobile iBox gym in Bromley.

‘I never miss a home game and go to some away matches although they can attract more of the real lunatics.

‘Most of Peckham is ‘Wall and after going for so long, almost everyone recognises me at the match, even if they don’t know me name. Millwall are known for being loyal, sticking behind their own and the support I’ve had has just been incredible. For my title fights I regularly shift well over 300 tickets – that’s more than follow Millwall some places – and, where possible, I like to deliver them personally.

‘Bermondsey is a big boxing area and they’re very respectful of the sport. Most men from round this way know how to hold their hands up and they all enjoy watching a ‘tear up’, with or without the gloves. But there’s never been any trouble at any of my fights. My mob gave (future British and European champ) Sam Eggington big applause after he bashed the crap out of me in Prizefightera few years back.’

That remains the only reverse on Garton’s 23 fight paid resume and he anticipates his choir will be out in force at The O2 Arena on Saturday week when he makes his first start of 2018 in a …..rounder against ………

‘The boys can be a bit boisterous; very loud and passionate,’ states the former car mechanic who has an 11 month old daughter.

‘I actually don’t like being the centre of attention. On fight night, I try to block the crowd out and just focus on my opponent. But I have to confess, when it gets hard, the roar of my crowd does give me a huge lift to ‘go again’. Al likes me to fight ‘stylistic’ but they really get me revved up and I can’t stop chucking windmills!

‘They’ve definitely intimidated a few of my opponents, especially at The York Hall which is like a bear pit. Three hundred make the din of 3,000. You can see that ‘What the Fuck’ look on opponent’s faces as a bit of panic sets in!’