Mismatch or a magic moment: Can Khan pull a fast one over Canelo?

The waiting game is nearly over and, boy, this is one we have been looking forward to. Amir Khan seeks to spoil a Mexican fiesta when he attempts to unseat the nation’s middleweight king in Las Vegas. 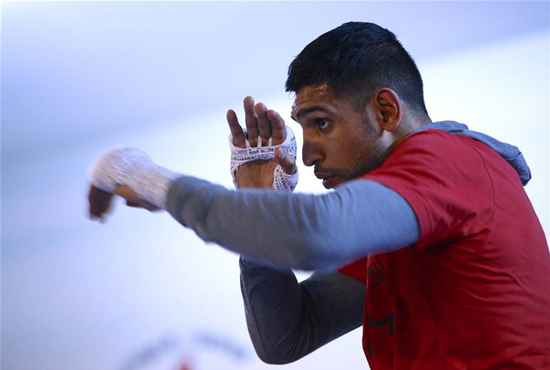 Saul ‘Canelo’ Álvarez, is a naturally bigger man – and something of a bruiser – who has only been outpointed once in 48 contests – and that by arguably the world’s supreme, also cagiest, fighting machine, Floyd Mayweather Jnr.

However, Canelo was dead at the weight when he fought Mayweather and the Money Man beat him on speed, even though, ominously, one female Las Vegas judge, C J Ross, controversially scored it a draw. She retired amid much criticism soon afterwards.

So the cards were stacked in Mayweather’s favour, with the self-proclaimed TBE insisting Canelo boiled down to a shade over 150lbs, which really didn’t leave much in the tank for the Mexican. This time it is him calling the shots as WBC champion and he has awarded himself some leeway with the weight set at 155lbs, even though the championship weight is 160lbs. Khan has not fought competitively beyond 147lbs.

I thought the weight-drained Canelo was poor that night in September 2013, but since then he has reignited his spark and is boxing with a high degree of aggressive intelligence. The flame-haired 25-year-old also carries a ko blow in either hand – and has a resolute defence – whereas you can argue that Khan has sometimes been deficient in both these departments.

Moving up a couple of weight divisions is a typically courageous but tremendous risk for Khan. Examples of little fellas bulking up with any great success are thin on the ground.

You can go back over a century to 1909 when middleweight champion Stanley Ketchel stepped up to heavyweight, but weighed just 170bs against the first black world heavyweight champion, Jack Johnson, who was a massive 205lbs. It was a total mismatch. Ketchel was down several times and ko’d in round 12.

This is the level of shock-factor Khan is aspiring to emulate.

Khan has innate self-belief. “I’ve seen other fighters move through the weights,” he says. “I’ve seen Sugar Ray Leonard go up against Marvin Hagler, Manny Pacquiao go up and fight Oscar de la Hoya. There are other names who have gone up and beaten heavier, bigger guys when they’ve been the underdog. I believe I can do the same thing. That’s why I’m taking this fight. I just want my name in history.”

Can Khan join that elite band? My heart says yes, but my head tells me that it is too late in his career for him to put on this sort of poundage in such a comparatively short time and this is could count against him, rather than help him.

Interestingly there is a return clause in the multi-million dollar contract which suggests Canelo is playing it safe. Just in case.

Amir sees it as his defining fight and of course he is not wrong about that.

So, will it be a magical, momentous night for British boxing or a ‘we-told-you-so’ mismatch?

It is a huge occasion for Khan, for boxing and for BoxNation. Discerning observers are saying this is the Channel of Champions’ greatest scoop and our team has worked their socks off to put it on. And of course there is much more to come.

The fight takes place on the Mexican holiday weekend of Cinco de Mayo, and Canelo fans are likely to dominate at the 20,000 capacity T-Mobile Arena.

Even though the vast majority suspect Khan’s best chance of winning is by taking Canelo the distance, getting the decision if it is a close run thing will be nigh on impossible. But if he does, wow, the boxing world will be turned upside down with Amir Khan standing right on top of it.

Khan v Canelo is exclusively live on BoxNation from 1.30 am Sunday morning. Go to boxnation.com to subscribe.

Tomorrow: Hubbard’s Cupboard sizes up the most controversial catchweight contest of all time.