Harrow super-featherweight hotshot Mitchell Smith has been nominated the 2015 Best Young Boxer of the Year by the prestigious Boxing Writers’ Club.

Dynamite-punching Smith, 22, is one of the best young talents coming through on the domestic scene with an unbeaten record of 13 fights with seven knockouts and has so far claimed the Southern Area, English, WBO European and WBO Intercontinental titles, all televised on The Channel Of Champion, BoxNation.

His last three fights have ended in back-to-back knockouts inside five rounds and he obliterated Dennis Tubieron in his last fight in July with one stunning punch to the ribs in the first round.

Ranked at number eight in the world by the WBO, Smith is moving up the rankings fast and his next fight is at the Harrow Leisure Centre on Friday 30th October when he faces south London rival George Jupp in a defence of his WBO Intercontinental belt.

“I’m absolutely thrilled to have been honoured with this award. The fact that so many knowledgable boxing writers, who have the whole of the country to choose from, have chosen me, it means a great deal. Also, to have my name on a trophy alongside so many great fighters makes me very proud. I hope that I’m able to go on and prove myself worthy of their choice in years to come.” Said Mitchell.

Frank Warren is delighted with Smith’s progress since turning professional under his guidance in 2012 and he is the 19th boxer promoted by the Hall of Fame Promoter to win the award.

“I’m delighted that Mitchell has been awarded the Boxing Writers’ Young Boxer of the Year of the award and he deserves it for all the hard work and exciting performances he has put on over the last twelve months, all of them on BoxNation.  From the brutal one punch finish of Tubieron to the stunning four-punch knockout combination of Antonio Horvatic, Mitchell brings excitement whenever he fights.  I’m expecting more big things from him in the next year and he’ll the one on everyones lips, he’s the next big star of British boxing.” Said Warren.

Smith will be presented the award at a glittering ceremony next month at the Savoy Hotel. 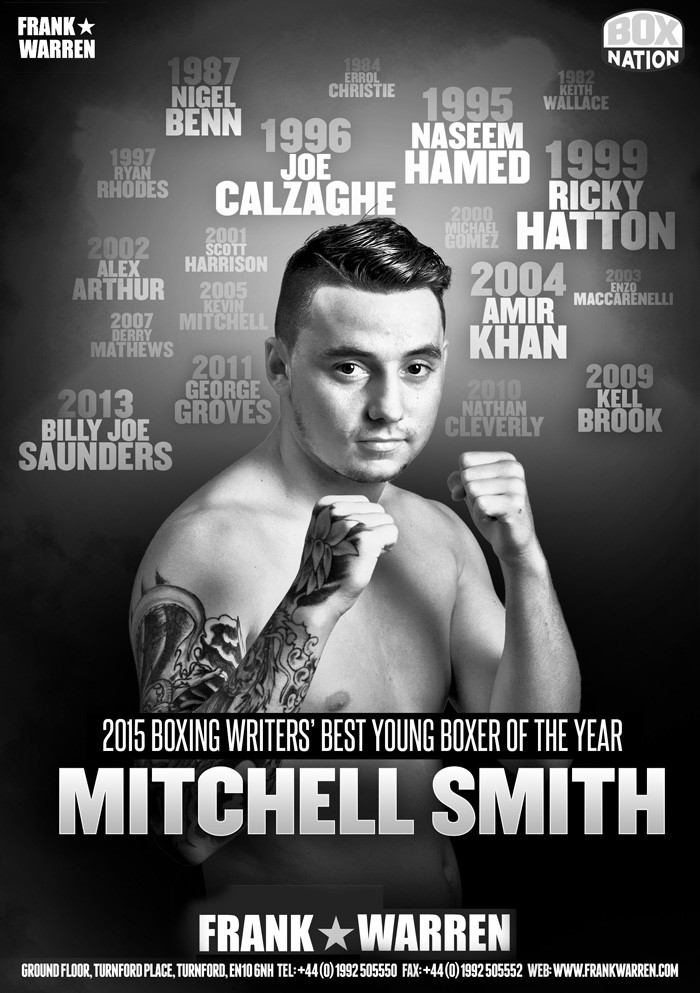