THE BIG INTERVIEW – LIAM WALSH
Round 1 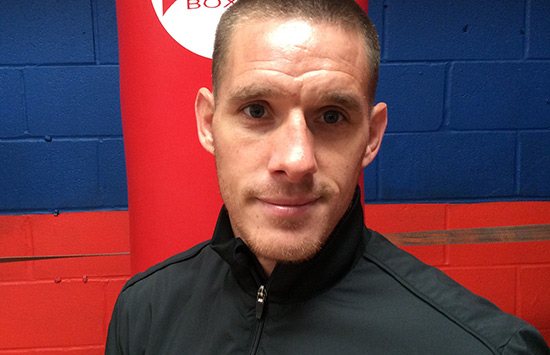 Floyd Mayweather jnr shot a startled sideways glance at Liam Walsh when the Cromer man quipped that ‘no man is unbeatable’ during the opening press conference for his forthcoming world title challenge against Money Team protégé Gervonta Davis at the Copper Box on Saturday.

Mayweather’s mock shock was comical and in keeping with a media gathering that was strictly showbiz – not least with the 49-0 superstar having been fashionably late on parade.

Walsh held his own as the verbal missiles were dispatched from the Mayweather camp – who appear to assume their young champion is in for an easy night’s work – but public speaking and self-promotion is a gig the 30-year-old would gladly pass up on.

However, with the biggest fight of his life looming, he knows that radio silence is not an option and fire will be met with fire if the sniping resumes during the final press conference on Thursday.

“I’ve sort of got used to it because I’ve been on some big cards over the years with Frank putting me on some really big shows,” considered the unbeaten challenger for the IBF super featherweight world crown.

“It is definitely not my scene though and I would happily sign a contract now to say I never have to turn up at any press conferences again and only have to turn up and fight! That would be perfect for me, but I also understand I can’t do that and I have got to try and play my part as best I can in promoting the fight.”

Deliberate or not, it was Walsh who raised the biggest chuckle in the room at the swanky Savoy Hotel with his ‘unbeatable’ line and he is not about to retract his statement.

In the eyes of Walsh – along with a good few others – Mayweather, for all his undoubted star quality, nurtured his record up to 49 not out by avoiding collisions with opponents at the peak of their powers and ensuring he picked them off at the optimum point in time.

“He wasn’t impressed, was he?” recalled Walsh with a grin. “I stand by it though, was it (Serafim) Todorov who beat him in the amateurs? The Bulgarian? I should have brought that one up!

“No man is unbeatable, I know he got to 49-0, but he manoeuvred himself well. My biggest props to Mayweather is that on 49 occasions he’s turned up. In this game when you are fighting at the top, which he has done for a long, long time, you need to get it right on the night.

“For him to get it right on the night 49 times is commendable and you’ve got to tip your hat.”

Facing the right man at the right time certainly served Mayweather well, while Walsh says his money wouldn’t have been on the Money against a couple of his personal favourites from the past.

“I agree and, for me, Tommy Hearns would’ve flattened him. I do think back through the fighters of yesteryear and think ‘who would’ve beaten him? Who would’ve given him a good fight?’

“A lot of people would say Ray Leonard and, even though he is my favourite fighter, I’m not sure he would have. It is all guesswork and fantasy fights now and we will never know, but I do think Sugar Ray would’ve given him more than enough problems and Hearns would’ve beaten him.

“It is all about styles and Tommy would’ve out jabbed him for a start.”

Walsh isn’t about to trade punches with big Money though, more the small change at the moment with Davis having picked up his first world title against Jose Pedraza in January in what was a voluntary defence by the champion.

Walsh had to play the waiting game for his mandatory shot, but now it is here he admits his mindset has altered from the norm as he nears a night where his lifelong dream could be about to become reality.

“Yeah, yeah it has. As for preparations, we’ve pretty much done the same as normal, like with sparring, how many rounds and things like that.

“My mindset though has definitely been different because it is a serious fight and I need to be switched on.

“It is a bit of everything really. There is definitely excitement, a bit more pressure – that I put on myself to succeed – because this is a dream I’ve been chasing since being a kid, so there is a bit more there.

“Saying all that, right now I still haven’t felt any nerves or anything like that yet. I am hoping that, on the night, I do feel nervous.

“I don’t normally, I’m usually just excited and buzzing to be fighting and performing, so I am hoping on this night to get some real nerves because it will make me raise my game.

“It is important to treat this fight as maybe the last fight of your life sort of thing, but also not to go too over the top on it or you are making a mountain out of a molehill.

“I’ve been doing this all my life now so it is nothing new. This is the biggest fight of my life, but it makes no difference really.”