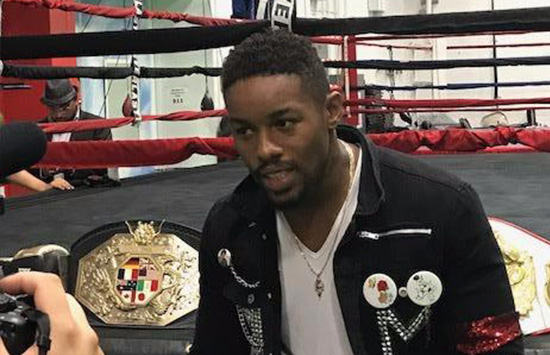 This past Tuesday at the Rochester Fight Factory, Willie Monroe Jr. met a throng of media personel during his media day workout in advance of his September 16th showdown with WBO World Middleweight Champion Billy Joe Saunders at the Copper Box Arena in London, England.

Monroe held court and analyzed many topics regarding the fight and his career as he gets ready for his 2nd World Title opportunity.

Below are quotes from the event, which included a visit form Rochester Deputy Mayor Cedric Alexander.

“I am battle tested, and I have gone through this and gave a good account of myself against Golovkin. This time, I am going to enjoy the moment a little more. I am enjoying the process.”

“Nothing is given to you, so I have to go take it.”

“I give people from my city hope.”

“The one thing that Golovkin and Canelo need, I am going to get my hands on, so they will have to see me.”

“Saunders is a little mouthy. I am a humble guy. It has me motivated, and come September 16th, he will have heck to pay.”

“I want my rematch with Triple-G, but I think Canelo is the more skilled fighter. It will be a great fight. I appreciate both of them for fighting each other.”

“I might feel like boxing his ears off, or I may want to get him out of there.”

“My application to boxing, shows that I am stronger than these guys.”