MONROE: MY TIME HAS COME 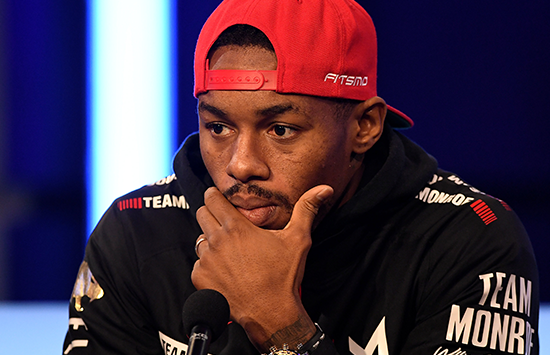 The talking is pretty much done before Billy Joe Saunders makes his second defence of the WBO world middleweight title. Last words go to his opponent Willie Monroe jr to have his say on what we can expect at the Copper Box on Saturday…

PREPARATIONS HAVE BEEN great for me going into this fight and I am just happy with the way things have gone. I am enjoying my time in London and I am ready to get it cracking now!

I have suffered with inactivity and, while that is always tough, it has been as difficult as I have allowed it to be. It is like anything else in life, you just have to keep going until your time comes.

My time has come now.

You know what they say, success comes when opportunity meets preparation. I’ve got the opportunity and I’m damn sure prepared.

I am confident, I have a great team around me and I am happy that my mindset has been to employ a great work ethic throughout the whole time of inactivity. I have stayed in the gym, I’ve stayed busy, I’ve stayed true to my craft – and now I am just looking to put on a show on Saturday night.

During the last year I did fancy getting a job at one point when the fights weren’t happening, but thanks to a good financial advisor and my wife, who has her own business, we were able to keep afloat.

As you would say in England, I have been a ‘kept man’, I love my wife Britney tremendously and she is an awesome women, who loves me and has stuck by me – and believed in me when I didn’t believe in myself.

That is what a wife – a better half – is supposed to do and I can only hope I have done the same for her.

I haven’t fought since beating Gabe Rosado on the Canelo-Smith card in September of last year and there have been a lot of top guys who have avoided me since then.

Many middleweights have been asked to fight me and have turned it down for many reasons. I am a leftie, I’m good, I’m slick, I have great skill and I am not basic.

Boxing is an unforgiving sport, as I know myself, because after one loss they consider you a bum. The top guys who are undefeated don’t want to risk a loss because it would throw them to the bottom of the pile, like it has done to me twice.

The difference between me and them is that I don’t mind taking chances. I will go to the other guy’s backyard with the odds against me. It is what I have been doing my whole career so I am sort of used to it.

A lot of guys won’t take that chance because they know the challenge that awaits them. They use excuses, saying ‘he is not this, he is not that’, but if I am so easy why don’t they fight me?

That is neither here nor there at the moment because I am just happy I have the fight now. They didn’t have to ask me twice when this opportunity popped up. They asked me after I beat Rosado about coming over to fight Billy Joe and I said I would come over to London in a heartbeat.

It makes for a good fight, it is all about who does what they do best. Every fighter is awesome at what they do, but it is about who can apply and make the adjustments come fight night.

Billy Joe is in good shape and he should be. He’s gonna have a lot of problems on his hands.

It is very contradictive of him because, while I don’t insult people, the only reason I called him fat is he called me a bum who can’t fight.

If I am such a bum, why go and get in the best shape of your life to fight me? If I am a bum you should be ok to beat me the way you were.

He went and got in the best shape of his whole career to fight me, which tells me that him calling me a bum and lacklustre is just a reflection of who he is.

Him questioning my heart doesn’t bother me because I know who I am and I don’t need another man to tell me. Billy Joe needs to talk and hype himself up so he can have the guts to get in there.

I don’t need to do that, I’ve never been a boisterous, talkative, loudmouthed guy. I just do my work and go home. It is just another walk in the park for me, I don’t have to prep myself, I’ve been prepped from the moment I was conceived in my mother’s womb.

I don’t need to talk another guy down to build myself up. I am comfortable being in there with another great athlete.

I hope he is the greatest Billy Joe Saunders he can be. That way, when I beat him, there will be no more excuses.

This fight will be whatever Willie Monroe wants it to be come September 16.