MY AIM IS TO DESTROY 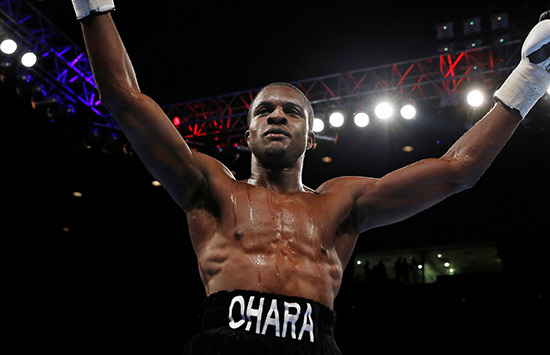 While Ohara Davies fully intends to cut out the shenanigans that have got him into bother in the past, he knows that boxing is show business and there are one or two character traits that could well resurface come fight week as his return to the ring at the 02 Arena on April 14 closes in.

The super lightweight is a natural showman, but he now acknowledges that he doesn’t always have to be the one playing the baddie, as he explains in his latest Fighter Diary…

I AM ALWAYS going to be a flamboyant person and I always have been. It is the way I am, but I am going to be more natural about it now.

I am not going to go into a press conference with the sole aim of being as flamboyant as I can be or causing as much of a stir as I can.

In the past that was the aim. Now, any comments that come from me will reflect how I feel and that will be the difference between the new OD and the old one.

The new me will just act out how I feel, which at times will be about being a bit humble and at others about being flamboyant.

Anything that I have got to say will be saved for my opponents and certainly not the fans.

I remember when I was up in Liverpool when I fought Derry Mathews I abused all the fans and that was so wrong of me. I look back on that now and think it was so pointless and I shouldn’t have done it.
It was another occasion when my management should have been there for me to give advice and tell me it was wrong, but that was not what they did.

I am thankful to Frank now for taking me from under the bus and putting me back in the spotlight on a massive show at the 02 Arena on April 14.

So now I will be back in the spotlight for the right reasons, rather than the wrong ones.
It won’t just be a bedding in fight for me at the 02, even though it will be the first with my new trainer. I want a good opponent, I actually know who I am fighting, and if it is confirmed it is one who has never been stopped and has been in with some good people.

My aim is to destroy him and make a statement – and do it within the first three rounds.

I want to prove that the real OD is here and here to stay.