MY DREAM IS BACK IN FOCUS 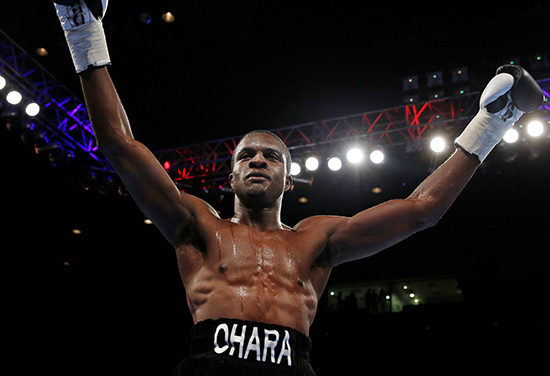 Ohara Davies has experienced a clean sweep of his professional support team, with the hard-hitting super lightweight now completely under new management. Enforced change doesn’t always come easy but, as he explains in his second exclusive Fighter Diary, he is plans to make the most of his new beginning…

I HAVE HAD a complete upheaval in my professional life over the last couple of months and it has been a really tough time for me. My team has totally changed and, if it was up to me, I would much rather have switched one thing at a time.

I lost basically everything in the space of three weeks. A manager, a coach, a promoter – and I even broke up with my girlfriend! In that time everything in my life changed.

People I thought I would be with for the next five or ten years were gone in no time and that was really hard at the time.

I am now getting adjusted to having a new coach, a new manager under MTK and also Frank. Even though I trust all them and know I have made the right choice, it is new experience that I have to adapt to in my mind.

Everyone who I thought would never leave did leave and that was the hardest part for me. There was a time at the beginning when I felt really down about it all, but these things do happen in life and it is a learning curve.

I will take it all in and will be able to advise any other young boxers who go through the same thing because I have been there and I am currently still living it.

That is a positive I can take from this whole situation.

I am now training with a new coach in Carlos Moreno at West Ham and he is a familiar face to me. I have been working with Carlos behind the scenes for the last two and half years.

In the (Tony) Sims gym, no offence meant, but he has got like eight fighters and he can’t focus on everyone individually. So when we were in the gym he would generalise and say everyone will work on the left hook or right hand on a given day.

It was never specific to me and with me being a pretty unique shape and style, a one-size-fits-all approach wasn’t ideal.

My fighting style is a lot different to say a Ricky Burns, Conor Benn or Ted Cheeseman so I should have been working on different stuff to them.

When you have so many fighters in a gym you cannot put so much energy and focus into each boxer. So I was doing my thing away from there every Tuesday, Thursday and Sunday night.

Now I am kind of glad I am not there anymore because I can now work with Carlos full-time and give him my whole focus.

Everyone will see in my next fight on April 14 that I am going to be much better fighter. I don’t feel I have been coached properly since I was working with Tunde (Ajayi), who I was with until my second fight.

Since then I haven’t experienced any boxing coaching that was tailored to me. I don’t mean any offence by this, it is just me being honest.

So like with everything else, I again see the change as being a blessing in disguise because I will now get the coaching I need.

People can say what they like about Carlos not having worked with pro before, but what I say is wait until April 14 and you will see a new and improved Ohara Davies.

The 02 Arena is my starting point and then Frank wants to get me a world title shot as soon as he can. He has told me to just focus on my boxing because it speaks for me and to let the boxing talk rather than my mouth!

I would like three fights this year and then to fight for a world title early next year.

Terry Flanagan is fighting Maurice Hooker for the WBO world title on the same 02 show as me. I sparred with Hooker some years ago out in the States and it is a fight I will be keeping a close eye on.

Hopefully I can fight the winner next year if they still have the belt.

I am now in the best place when it comes to the super lightweights because, as well as Terry, there is also Jack Catterall and Josh Leather in the stable.

I don’t think too much about any of them because my focus is on my own path. If we do cross paths this year then so be it.

It would be like a semi-final for a world title and it is a fight I want because I know that I can beat anyone.

I know that in the fight I lost against (Josh) Taylor, I lost it because it was the worst camp I have ever had. I changed up so much and, even though I was fit, it wasn’t me in there.

Where I have talked about fighting purely for money in the past, the truth is I want to win titles. In previous camps I have been blinded by the lights and fame, blue ticks and followers. The whole celebrity thing I was pushed into, I got blinded by it all.

The people around me should have kept me grounded and made it not about the money. If you focus on the titles the money will come anyway.

My dream last year was to become as famous as I could be, to make as much noise and talk as much sh*t as I could. That was my goal then.

Now under Frank I am back on track and I’ve got the dream I had when I was young back in focus. The fire is back in my belly and my only goal is to get the titles and become the best in the world.