NATHAN AIMING TO BE SLIM-PLY THE BEST 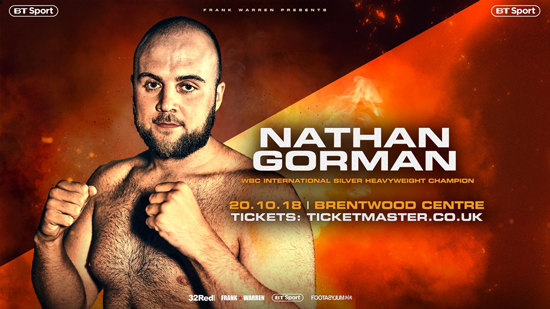 NATHAN GORMAN will be slimmed down by trainer Ricky Hatton to help him add even more power to his armoury.

The 22-year-old might not be built like an Adonis, but he and Frank Warren stablemate Daniel Dubois are both winning plaudits and on a collision course to face each other.

British boxing great Hatton said: “Nathan’s power is developing because he’s maturing and more suited to the type of training we do.

“We have him doing a bit of strength work and we’re trying to slim him down a little bit.

“He is never going to be a body beautiful because some people aren’t built that way. We can’t all be built like Anthony Joshua or Daniel Dubois.

“But he is solid enough, Making him a little bit leaner and explosive will give him advantages. That is the theory behind that.

“He is also improving technically and punching with his whole body now. When he first came he was still a little bit of a rookie and arm punching.

“He is punching nastily and along with his speed and boxing ability which he is known for he is coming into his own.”

The Nantwich boxer has fought twice so far this year, and in June impressively beat good Irishman Sean Turner.

Hatton hopes that promoter Warren will find a spot for his protege on the Josh Warrington v Carl Frampton world title undercard in Manchester on December 22.

“Nathan had his career best win against Sean Turner, but we’re looking to move on from that and impress further,” added former two-weight world champion Hatton.

“He is still only a baby, but in his last fights showed what he is capable of and all about. He hasn’t even scraped the surface for what is to come.

“It looks like we’re having two fights before the end of the year and that will cap a lovely 2018 for us.”