NAZ WOULD’VE WALLOPED WARRINGTON IN THREE ROUNDS, SO I’LL DO HIM IN SIX, TAUNTS GALAHAD 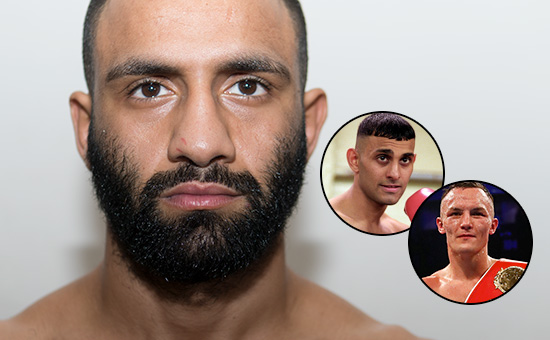 KID GALAHAD has been getting tips on how to beat Josh Warrington from featherweight legend Naseem Hamed.

Galahad (26-0, 15 KOs) was encouraged to box by Naz when he was a kid and sent him to the famous Ingle gym in Sheffield.

Now Naz is playing his part in causing the downfall of Warrington (28-0, 6 KOs), and is expected ringside on fight night supporting him.

Sheffield’s Galahad, 29, said: “I don’t want to go into too much detail, but Naz rang me, said a few things and I’ve taken them in.

“Naz would’ve loved facing someone like Josh and beaten him in no more than three rounds.

“It will last no more than six when I take Josh’s title.”

Warrington, 28, caused an upset when he won the title last May outpointing Lee Selby in front of 25,000 fans at Elland Road and in December beat Carl Frampton over 12 rounds in a classic first defence.

Galahad added: “Listen, he has two had good wins against Selby and Frampton.

“I sparred Lee when he boxed Josh and he was a completely different fighter. He was dead at the weight, but it is what is.

“I’ve got to give Josh credit and I expect him to be even better than those two performances, but I believe I am better than him in every single department.”