NEARLY TIME TO CROSS THAT BRIDGE

The response from fight fans in Wales to our stacked card in Cardiff next Saturday, I have to say, has been terrific. 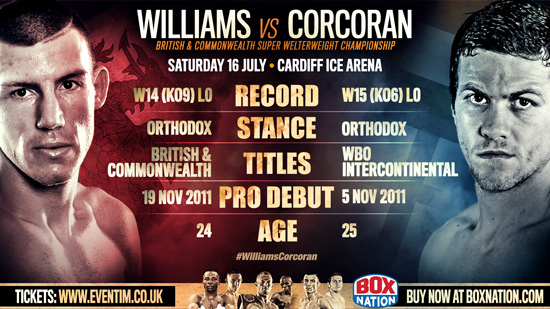 From the moment the match of the unbeaten pair of Liam Williams and Gary Corcoran was first mooted to be on the home patch of British champion Liam, the interest was instant and the demand for tickets gathered pace straight away.

It is something I bang on about a fair bit, I’m told, but our mission will always remain in trying our hardest to deliver the fights the fans want to see. The British and Commonwealth titles are on the line, but what fascinates boxing fans is that this is an even-money contest between two young, hugely ambitious fighters who are prepared to gamble with their undefeated records.

One reason why they have signed up to do so is because they back themselves, both possess incredible confidence that it will be their arm raised at the end of the fight in triumph.

These are the sort of fights we would like to make more of, where clearly talented boxers are willing to take a risk in order to catapult themselves to the next level. It is hardly the end of the road for the loser either and, if the match lives up to expectation, why not do it again?

We haven’t built a headline star in Wales for a little while, so the progress of Liam after a lengthy lay-off with injury was all the encouragement we needed to return to the Principality. We have enjoyed great nights there in the past and I sincerely hope this is the first of many return visits.

There is an obvious appetite for major boxing promotions in the capital, as demonstrated by Liam personally selling close to 2,000 tickets. Gary has more than done his bit as well so we will be guaranteed an electric atmosphere when these two take to the ring.

Gary’s healthy clutch of fans will be the only home comforts for him on the night when he will be stepping into the dragon’s den. Knowing him as I do, he will not care a jot and his team at the Peacock Gym are so confident of success I wouldn’t be surprised if they have already made space in the boot for the belts on the return journey.

We are certainly going to find out what Liam has got in his locker. We know Gary has no trouble in going the distance, while Liam is a specialist in the quick finish, so if it goes into the later rounds the home favourite will have to answer a lot of questions.

Gary has already offered his chin up to sample Liam’s power, but I wouldn’t advise on him making it an available target too many times because one thing we know about Liam is that he can bang and not too many stay on their feet when he lands flush.

All the talk of Liam’s devastating punching probably detracts from the fact that he is not lacking in boxing ability. This fight will provide the 24-year-old with the platform to demonstrate he is the complete package because Gary is as relentless and durable as they come.

If I had a hunch over the outcome of this one I would keep it to myself, but what I do predict is that this fight will not disappoint. It is hard to see how it can.

At time of writing, the Coral odds make interesting reading. They are swaying heavily towards the home fighter, making him the 2/7 favourite, with Gary out at 5/2, which looks particularly generous to me. The most tempting odds on offer are that for the draw, a lengthy 25/1.

One thing we know for sure though, when these two step between the ropes, it is odds on to be a thriller.