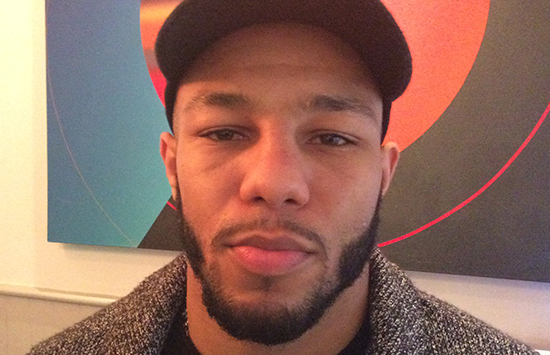 NOT FOR THE first time, Frank Warren has added a dash of royalty to his ranks.

Having overseen the reign of Prince Naseem Hamed in the nineties – and doubtless many others with a regal stagename – the Hall of Fame promoter is now charged with guiding King Arthur to the throne.

The heady light heavyweight mix is about to become more potent once Lyndon Arthur gets in the thick of it, as he intends to do in 2018.

Like his now stablemate – and likely future rival – Anthony Yarde, Arthur is another knockout artist, with only his first professional opponent surviving to hear the final bell.

And like Yarde, Arthur is hoping the BoxNation-BT Sport axis will result in huge public recognition of his obvious potential.

“I’ve been under the radar, I’ve had nine fights in the last year, with I would like to say eight stoppages, but the last guy was disqualified for keep spitting his gumshield out,” reported the Manchester-based 26-year-old.

“So I’m nine wins, seven stoppages, a light heavyweight – a division that is booming at the minute with Anthony Yarde and the likes of Joshua Buatsi and Jake Ball. I am happy to be here.”

Whether his coach, Pat Barrett, deems him quite ready to join the party just yet remains to be seen, given the lengthy apprenticeship he prescribed for his nephew Zelfa before he was unleashed for an English title assault in his 19th fight.

Arthur, however, comes with an amateur pedigree that should enable him to shorten the learning process.

“When I got on the GB squad, Zelfa turned pro then, while I waited it out a bit and got a little bit of GB experience fighting around the world,” Arthur added.

“I went my way and he went his and now we are both pro.

“We’ll just see how it goes because I am not in a rush. I’ve only had nine fights in one year, while Zelfa was a pro for three years before he got any title.

“I think I will go a bit quicker than that, personally, with the light heavyweight division being how it is.  As a fighter I feel like I am ready to go now – or yesterday – but what Pat says tends to go with him being the main coach. We’ll see what happens.

“Next year will be a fun one.”

Naturally, now Arthur will be operating on a platform fit for a king, talk will quickly start turning towards a battle with the Beast.

“Of course, it is going to happen and I can’t wait,” said Arthur with a knowing grin. “Everyone is talking a lot about him but, once I get the exposure I am going to get, people will talk about me and the fight will build automatically.

“That goes without saying.

“He is cool and there is no animosity between us. I am probably not even on his radar. Eventually I will be though and he is going to have to look at me.

“For now, we are on our paths, on our journeys, and I have no hate towards anybody in boxing. This is just a business.

“Hopefully, with Frank’s backing, I can get to fight at maybe the Copper Box, Leeds with Josh Warrington – I want to circulate and let everyone see my talent.

“Whatever happens I am going to make some noise and I believe I am talented enough to do that.”

EVEN THOUGH, AFTER just one professional fight, Harvey Horn accepts he is a long way from the position of calling out future opponents, he has identified one where he believes the gabbing might just be more entertaining than the jabbing.

The former Team GB flyweight got his pro career off to a winning start with an impressive third round stoppage of Denis Bartos at the Copper Box on December 9 and he knows there are a good number of domestic duels in the offing once he gets a few more wins under his belt.

There is one that appeals in particular.

“I looked at all my potential rivals, especially domestically, and you’ve got Joe Maphosa, who is a good kid and I have sparred many rounds with Joe,” revealed the 22-year-old.

“I would like that fight quite soon, within a year or two I wouldn’t mind that one and would be happy taking that.

“Sunny Edwards, because he’s got a bit more of an outgoing personality, the build up would be good and it would sell a lot better. I know for our weight that is saying a lot, but it would be a good fight that wouldn’t be lacking in build up.

“I have a good following behind me and they know about Sunny already because there have been things on social media. It would come together well and even the press conference would be very, very good.

“I would watch it!

“I have never been one to call people out though, I would rather get called out, so Sunny won’t hold back.

“Once I get this year done with five or six fights, then I will start targeting people and start looking at the likes of Jay Harris, Joe and Sunny.

“I will be looking to go through the domestic division and prove I am a level above, like I have done over the last few years.”