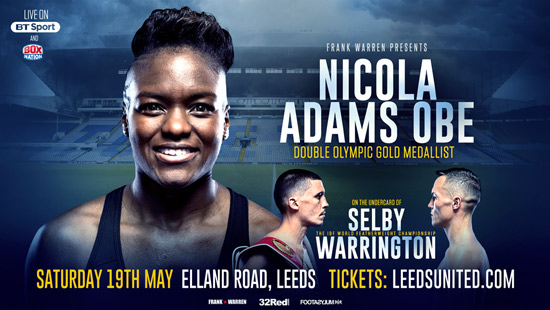 Double Olympic Champion Nicola Adams OBE will fight for the fourth time as a professional on the undercard of Lee Selby’s blockbuster IBF Featherweight World Title showdown with Josh Warrington at Elland Road on Saturday 19th May.

‘The Lioness’ will fight over ten two minute rounds against an opponent to be confirmed in her second outing as a professional in her home city of Leeds.

British hero Adams ended 2017 in style with a third round stoppage win over Soledad Macedo as she improved her unbeaten record to 3-0 on the undercard of Billy Joe Saunders’ successful World Title defence against David Lemieux in Canada.

Selby v Warrington is the first ever World Title fight to be held at the home of Leeds United and local hero Adams is thrilled to be joining what is set to be the biggest sporting occasion in Yorkshire this summer.

“This is going to be a huge event for the city of Leeds and all of Yorkshire and I’m delighted to be a part of it,” said Adams. “The atmosphere when I fought at the First Direct Arena was deafening and it will be ten times louder when I step into the ring at Elland Road. There is no better feeling than fighting in front of your home crowd.

“My aim is to be fighting for a World Title of my own as soon as I can and to achieve that in my home city would be a dream come true. I’m constantly learning and developing and I hope it won’t be long before I’m knocking on the door for a shot at a Title.”