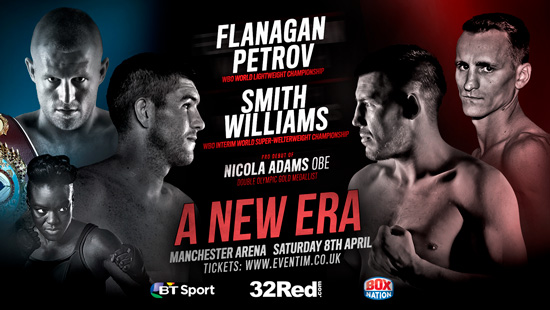 In my opinion, based on my multiple decades in the game, fans at the Manchester Arena on April 8 – along with viewers on BoxNation and BT Sport – are about to witness in action one of the finest arrays of young talent ever assembled on a single card for many years.

I am not just spouting the idle, ill-informed hype that British boxing fans must be becoming weary of hearing by now. This bill is a genuine blockbuster and I will be mightily surprised if a good number of the fights don’t catch fire and turn into ring classics.

All the ingredients are there.

The headline fights speak for themselves and I would imagine plenty more will be said and written about Terry Flanagan‘s toughest defence of his world title against Petr Petrov and the titanic tussle between Liam Smith and Liam Williams for the WBO Interim world title over the course of the next week.

But look below the shiny surface and there are a good few crackers on the undercard, with a clutch of top prospects still starting out and others taking a step up.

Many of the home fighters on the card will be making a first appearance for us, having signed up to appear on the far-reaching BoxNation-BT Sport platform and I am really looking forward to seeing how they all shape up.

At the heavier end of the scale, we welcome Jordan Thompson and Daniel Dubois to the fold and I don’t think I am being over-optimistic in expecting big things from the big fellas.

Cruiserweight Jordan has just five fights on his card so far and it would be fair to describe him as explosive as those five outings have yielded just nine rounds of experience.

The cruiserweights are coming back into fashion with some top operators at world level, so I fully anticipate ‘Troublesome’ giving them a bit of bother before too long.

I think everyone is excited to see what young Daniel brings to the heavyweight table because it is the weight category that seems to create the biggest buzz in boxing circles and beyond.

He recently sparred with the Furys, Tyson and Hughie, and has also been in the gym ring with Anthony Joshua. I am told he more than held his own with all of them.

Among the others on the bumper bill – and more about them next week – Zelfa Barrett will continue to build his resume on the night, with his card currently reading 15-0 and it really won’t be long now before he is let off the leash to go hunting for titles.

One particularly tough fight to call – although I know who my money is on – is the super lightweight match-up between Jack Catterall and Martin Gethin.

Jack is one of the top prospects in the country who is looking to realise world title ambitions before too long, but he is in for a tricky defence of his WBO Intercontinental title.

Last time out, Gethin – who has been in with both Derry Mathews and Terry Flanagan – brutally stopped John Wayne Hibbert to claim an IBF International title and is in no way an opponent Jack can afford to take lightly.

The super lightweights is a tasty division at both British and world level and I reckon Jack has a big part to play, but he needs to be decisive in tough fights like this to prove that is where he belongs. 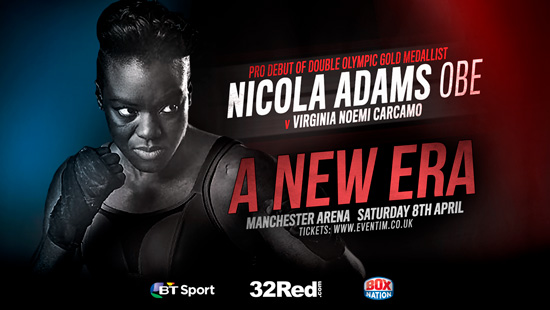 April 8 is an even more special occasion because we will get to see the professional career of the Golden Girl Nicola Adams begin to unfold.

Nicola is a superstar of British sport following her double Olympic success and I am thrilled that she has aligned herself with us to embark on her professional voyage.

First stop is a redoubtable Argentinean, Virginia Noemi Carcoma, who has had seven pro fights, winning four and drawing one, and ominously is known as La Tigresa (The Tigress). No doubt claws will out in a sound initiation test for Nicola’s much-vaunted pro debut.

However not everyone, it seems, is so enthralled by Nicola’s historic entry into the paid ranks. Before the last fight of Ireland’s Katie Taylor, I heard that Eddie Hearn engaged a spot of sly innuendo by referring to ‘cheap imitations’ in women’s boxing.

Who can he mean? Well, Nicola is THE pioneer of British girls bringing home the big prizes and I am delighted to be staging her debut in her home country.

As columnist Alan Hubbard, who has followed Nicola’s career from the off, wrote here recently, there is no question as to who is the Real Deal among the ladies who punch. Multi-medalled Nicola will be easily the biggest draw in of the two in the country where she was born and bred.

Taylor may have a huge fan base in Ireland and while I do admire her skills, super-flyweight Adams is the more exciting and has achieved the status of national treasure not just because of her fistic prowess but as, Alan pointed out, “because of her ever-effervescent, sunny persona.”

If anyone is going to break down barriers and create a crossover appeal for female fighters, it is Nicola. There is no doubt she is the leading lady of the sport this side of the Atlantic.

It will take more than cheap shots to wipe the smile off Nicola’s face and she will also know how hard Matchroom tried to sign her up before she decided that ours was the better pathway for her professional ambitions.

Maybe she wasn’t so cheap after all, eh, Eddie?