NO AVOIDING ME NOW 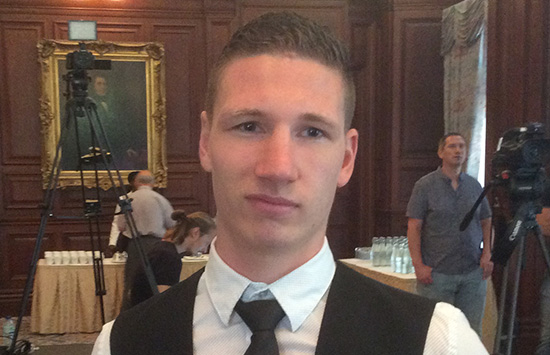 Sam Bowen last week linked up with Frank Warren, with the Hall of Fame promoter now being responsible for plotting the next moves of the British super featherweight champion. In his first Fighter Diary, Sam gives his take on signing up to perform on BT Sport, winning the Lonsdale belt, being an avoided man and what he hopes to accomplish over the next year…

I FIRST GOT to hear about the prospect of signing a promotional agreement with Frank Warren only very recently. Obviously I have been speaking to Carl on a weekly basis since my last fight and he spoke to me last week, telling me about it and then we came to London.

It is brilliant for me and I am over the moon. It is a break that is well deserved and well needed, to move up to bigger and better things.

We believed in me and obviously I believed in myself and where we could go. You’ve just got to get over the hurdles to get to where you want to get. It wasn’t ideal before, but I have now won the British and we knew as long as I kept beating these lads that I would get picked up and the bigger things would come from there.

I didn’t really doubt it would happen for me. Even after all the withdrawals from title fights against me the Board kept putting me onto the next thing and I knew eventually it would come for me.

Of course I would have preferred to have boxed for the English before boxing for the British, but obviously that was out of my hands. There are levels you go through and I have jumped a few now, but I have held my own perfectly fine.

We worked to beat him and it went how I thought it would. I didn’t go in there to try and knock him out in the first round because I know he is well experienced and can do the rounds like he did against Martin Ward and others.

So I just stuck to my gameplan, winning the rounds, while believing the stoppage would come if it came and it did.

I am now in a promotional stable with a number of other super featherweights around my age and experience and eventually we could all fight. We’ve had options to fight before and people have pulled out, but these chances will come again now, so we will see.

You can only box who is put in front of you and it is not my job to sort that out. I’m not bothered who I box as long it is a worthwhile fight and it is going up rather than down.

They would be fights that would get people talking. Myself and Lyon Woodstock, for instance, would be big in Leicester. In my opinion though, he has had a chance to box me and he didn’t so now, for me, it would be a step down boxing him.

I think he needs to work his way up to box me now. I said to Carl that, after all the times they have said no to us, it will be funny now if all of a sudden they want to box us.

I’d laugh and say no, just to prove a point! You can’t pick and choose when you want, but I am sure these fights will come again and the options are there.

I don’t particularly mind who I box and I’ll box anyone to further myself.

I will now have the opportunity to showcase myself on television. It is something you don’t get on the small hall shows and my last fight wasn’t on TV, so it will be good now to get my name out there more.

You can’t beat the TV shows and, for a lot of these lads like Woodstock and Zelfa Barrett, they probably are better known than me. Not because of ability but because they are on TV shows.

I’m ready for the public interest because I am level-headed and I don’t think too much really fazes me as I don’t let anything get to me. I’m quite calm and relaxed.

I know a lot of people keep hearing about me being avoided and it is funny some of the stuff that Carl puts on social media. All it is about is to wind people up and I don’t really buy into it myself.

Don’t get me wrong, people do send me screenshots of what’s been said and I do find it funny, but it is just a laugh to get people interested in a fight. I don’t personally get involved and will do my talking in the ring. The amount of people who have chatted sh*t and when it comes to it they don’t perform, they end up looking silly.

I won’t get roped in and will keep my mind on training.

Reaching the very top is obviously the aim now we are with Frank. He has got the connections to get each individual boxer who is under him what they want.

Like Woodstock, he is ranked quite highly via being with Frank, who has got him to where he wants to be and fair play to him. Hopefully it will happen with me.

I’ve got the talent and now I just need the options and opportunities to get on with it.

As for the next year, personally I would like to defend my title a couple of times at least. Now we are here I would be more than happy to look beyond the domestic scene because you can have other belts as well as your British.

I would be more than up for that and it would be my ideal.

YARDE ‘LOOKING TO DESTROY THE WINNER’ OF BETERBIEV VS SMITH JR