No doubting Big Josh. Or is there in boxing’s ’junior’ heavyweight championship?

It is not a lack of patriotism but I hesitate to be swept along by the tide of euphoria which decrees that Anthony Joshua will join Tyson Fury as a British world heavyweight champion tonight. 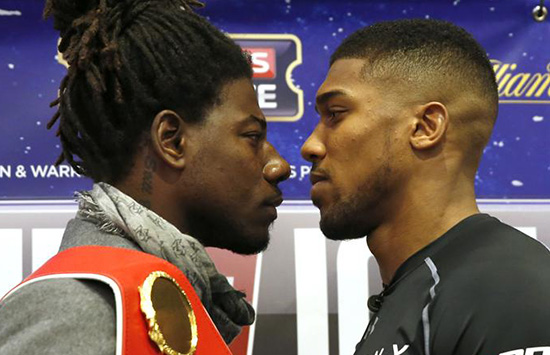 I have this niggling feeling that it is by no means a foregone conclusion that we will be dancing in the aisles or in front of the telly and belting out ‘Rule Britannia’ at the culmination of his challenge to IBF champion Charles Martin at the 02.

I don’t know why, but unlike most I am not convinced that Joshua will actually win this one – although of course he should. They are a pair well matched, from ankles to biceps and height and weight, the exceptions being that at 29, the man from Carson, California is four years older and has had nine more bouts.

Not that he has actually fought anyone, but then neither has Joshua. When Martin picked up the belt the IBF disgracefully nicked from Fury he hardly had a chance to close his gloves before Ukrainian Vyacheslav Glazkov fell on his sword – or rather his right knee – and limped out of the fight.

We don’t know too much about Martin, but then do we yet know enough about Joshua? The American may be cuter than many think.

And again, is Joshua as good as everyone seems to think? This fight – and it looks a decent scrap on paper – between two tyros of the division will provide the answers. What we do know is that Joshua has little regard for Martin.

A few months back he almost fell off his chair in astonishment when he learned in a press conference that the unknown Martin would be fighting for one of Fury’s titles. ‘Charles Martin?’, he chortled. ‘You’ve got to be kidding.’

No kidding. Martin won and like Big Josh he is unbeaten, but one significant difference of concern is that he is a southpaw. Joshua hasn’t fought one as a pro – and ominously the last time he was knocked was by a leftie, as an amateur.

Ok, so he did beat a couple in the Olympics, but there are those who believe he is a lucky Olympic champion.

I am among those who think he lost to the Cuban Erislandy Savon(the nephew of the triple Olympic champion Felix) in the first round and there is little doubt that, had the Olympic final against the Italian copper Roberto Cammarelle been anywhere but London, Joshua would not have got the verdict.

And here’s another curiosity. If Joshua wins, not only will the UK have two heavyweight champs, but he will become only the second British Olympic champion to hold a world pro title, after James DeGale. A bit like the proverbial No.9 bus – you wait ages and then two come along together.

Having said that he has done all that has been asked of him – which may not be that much – as a pro.

Don’t get me wrong, in common with every else like Big Josh. Indeed, what is not to like about him? He is amiable, charismatic, a true athlete and he can certainly dig. I just feel this may be one, two or three fights too soon for him.

And if he does win, where does he go from here? Is he ready for the likes of Fury, Deontay Wilder or Alexander Povetkin?

As world heavyweight title fights go, this has been diminished to that almost of a a junior championship. Fury’s return with Wladimir Klitschko, now confirmed for July 9 in Manchester is a real blockbuster.

Hard on its heels in terms of global significance is the upcoming defence by Wilder in Moscow against Povetkin – another BoxNation scoop and one which may provide a bit of an upset, knowing what goes on in Russia.

Of course we hope that above everything, the two combatants and all on the O2 bill come through unharmed in view of what happened with Nick Blackwell a fortnight ago. Boxing cannot afford another health scare.

Joshua says this is just another day at the office. Well, good luck AJ – just make sure those filing cabinet drawers are closed and that you don’t trip up.

Boxing’s other biggie this weekend should see a last hurrah for Manny Pacquiao against Timothy Bradley in Las Vegas – but perhaps not a winning one.

I fancy the the much-improved Bradley to make it 2-1 in their trilogy, leaving, the Pacman to concentrate on Filipino politics or, heaven forbid, accept an invitation to box in the Rio Olympics which even his long time friend and promoter5 Bob Arum, never one to mince words brands as ‘insane.’

He adds: “You can’t have top professional fighters competing in the Olympics against raw amateurs. To mix them up is wrong.

“People say ‘Well in other sports we allow professionals to compete in the Olympics.’ But boxing is not other sports. It’s a hurt sport. It’s dangerous. “To put an unheralded kid from Nigeria in the ring with a Manny Pacquiao? You should be sentenced to jail for doing something like that.”

Bang on, Bob, Are you listening Dr Wu?

Tomorrow: Catch up with Alan Hubbard’s Punchlines: Who is the biggest dope in boxing?