NO IF OR BUTS, BOXING IS READY FOR THE RETURN FIRE OF FURY 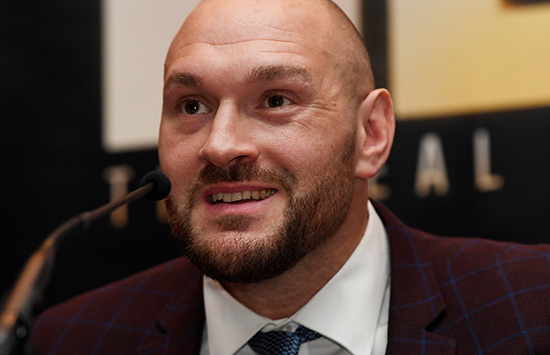 IF is among the smallest words in tbe English dictionary but in boxing terms it is one of the biggest.

IF…Those two little letters can make a career in the ring flourish or founder.

For instance: IF comeback Gypsy kingpin Tyson Fury can recapture a semblance of the scintillating form which put Wladimir Klitschko in a trance two and a half years ago then he will stand either Anthony Joshua or Deontay Wilder on their head and rule the heavyweight world again.

And IF his Traveller mate Billy Joe Saunders can provide a a replica of the fleet-footed, sure-fisted display which made Daniel Lemieux look a novice then he can give the great Gennady Golovkin the fight – and possibly the fright – of his life when they eventually meet.

IF not then we may be back to square one in the square ring. But all the portents are that Queensberry’s fearsome twosome will get their opportunities.

Booted and suited, and admirably minding his language, Fury looked frighteningly fit when appearing in front of a jam-packed press conference in London’s West End on Thursday, warning that he was ready, willing and distinctly able to knock Joshua’s block off – or Wilder’s too for that matter – to recapture the confiscated crowns he considers rightfully his until his career was rudely interrupted.

As Frank Warren with whom he has signed an exciting new reprise deal, says, he may be fit, but now he needs to be fighting fit.

And that surely will happen as he tunes up for his initial re-appearance at the Manchester Arena on June 9.

Unquestionably, judging from Thursday’s media turn-out, there is massive interest in Fury’s return.

Not only is he physically the biggest thing in boxing but he means big business all round.

However, let’s not get ahead of ourselves.

In the case of Muhammad Ali (out from 1967-1970) a couple of warm-up fights, against Jerry Quarry and Oscar Bonavena, were insufficient for him to regain the heavyweight title from Joe Frazier.

He did become champion again – eventually – without being athletically the same again (though George Foreman might dispute that).

But another lengthy absentee, Jack Dempsey, never did. After knocking out Luis Firpo in 1923 the Manassa Mauler did not defend the title until three years later when Gene Tunney beat him unanimously on points, a victory he repeated a year later.

The Vegas promoters are said to be seeking another Mexican foe for Golovkin on May 5. Let’s hope he is a vegetarian

So a successful resurrection for Fury is not a given. But, hell, it is going to be fun watching him try – and I for one will not be betting against it.

And so to Billy Joe.

The other English ace in Warren’s pugilistic pack will be keeping a watchful eye on proceedings in Las Vegas when the Nevada State Athletic Commission decide what – if any – action to take against doped meat- munching Canelo Alvarez.

The mega match-up with Golvkin scheduled on May 5 is already shelved and it seems probably that a mere six months ban will be imposed, leaving the fight free to be pencilled in for the autumn.

If so it is just a slap on the wrist fior Alvarez, who claims to have ingested meat contaminated with the banned drug clelenbuterol, an excuse common to Mexican fighters.

Golvkin says he will still fight on a Cinco de Mayo bill but it won’t be against Billy Joe, who is honouring his own own WBO middleweight title defence date at the O2 on June 23 with Martin Murray.

The Vegas promoters are said to be seeking another Mexican foe for Golovkin. Let’s hope he is a vegetarian.

IF – there’s that word again – Golovkin and Canelo do cross fists this year I expect the Kazakh to acquire the victory that should have been his when they gave that dodgy draw in September.

But should Alvarez receive a longer ban, then Billy Joe, assuming he accounts for Murray, which he should, could step forward in his place. Otherwise his deserved unification shot would be early next year.

Look, I am not saying Saunders will beat Golovkin, who, happens to be my favourite fighter, because I doubt he has the power to land a knock-out him blow, which it may take.

But he has more going for him than many of Golovkin’s previous opponents.

He is innovative, takes a good whack and his new-found balletic agility plus Ingle-infused ability to hit and hop it, allied to a southpaw style that Triple G has never relished, can take him all the way; maybe even to a split decision. IF it all comes together on the night.

LAST WEEK ON BoxNation’s Boxing Matters I was asked by the programme’s excellent host Alex Steedman where I would place Anthony Joshua in the catalogue of all-time British heavyweights and post-war world heavyweight champions.

I like the personable AJ, who is terrific for boxing in this day and age, turning every fight into an event, but he does have defensive limitations which one day may be his literal downfall.

Personally I do not think he would have lasted the course with the golden era greats such as Muhammad Ali, Joe Frazier, George Foreman, Larry Holmes, Floyd Patterson, Rocky Marciano, Evander Holyield, Lennox Lewis or Riddick Bowe. Or even huge punchers like Sonny Liston, Earnie Shavers,Vitali Klitschko (or the Wladimir of a decade ago).

And three Brits, who, when all at their respective peaks, who surely would beat him are Lennox Lewis, Frank Bruno and Joe Bugner, while Tyson Fury still might.

Henry Cooper? No, he was surely too light and, and cut too easily, though ‘Enry’s ‘Ammer could well have clubbed Josh as it did the then Cassius Clay.

There is also one other Brit who might have got the better of Joshua.

The great Welshman Tommy Farr, a pre-war British champion, was the first challenger for Joe Louis’s world title in 1937, giving the Brown Bomber one of the toughest fights of his career, hurting him numerous times while easting that famous jab over the full 15 rounds.

The unanimous decision in favour of Louis was booed by the 37,000 crowd at New York’s Yankee Stadium but Farr, who had 137 fights and died in 1986 aged 72, later provided one of boxing’s most memorable punchlines, saying: “Every time I hear the name Joe Louis my nose starts to bleed.”

CAN’T WAIT TO tune in to the telecast of the Carl Frampton- Nonito Donaire scrap from Belfast next Saturday to get some rational interpretation and reporting from the ringside.

Such was what I have dubbed ‘Skyperbole’ from Cardiff when Anthony Joshua defeated Joseph Parker that we turned down the sound and switched on to Talksport where at least John Rawling presented a balanced assessment of what was taking place, instead of using the mic as a pom-pom.

Be good to hear the estimable Rawly telling us how it is – while also letting us see for ourselves – when Frampton v Donaire is screened live and exclusive by BT and BoxNation next Saturday.