No kidding. Galahad is a name changer but he is also a game changer? 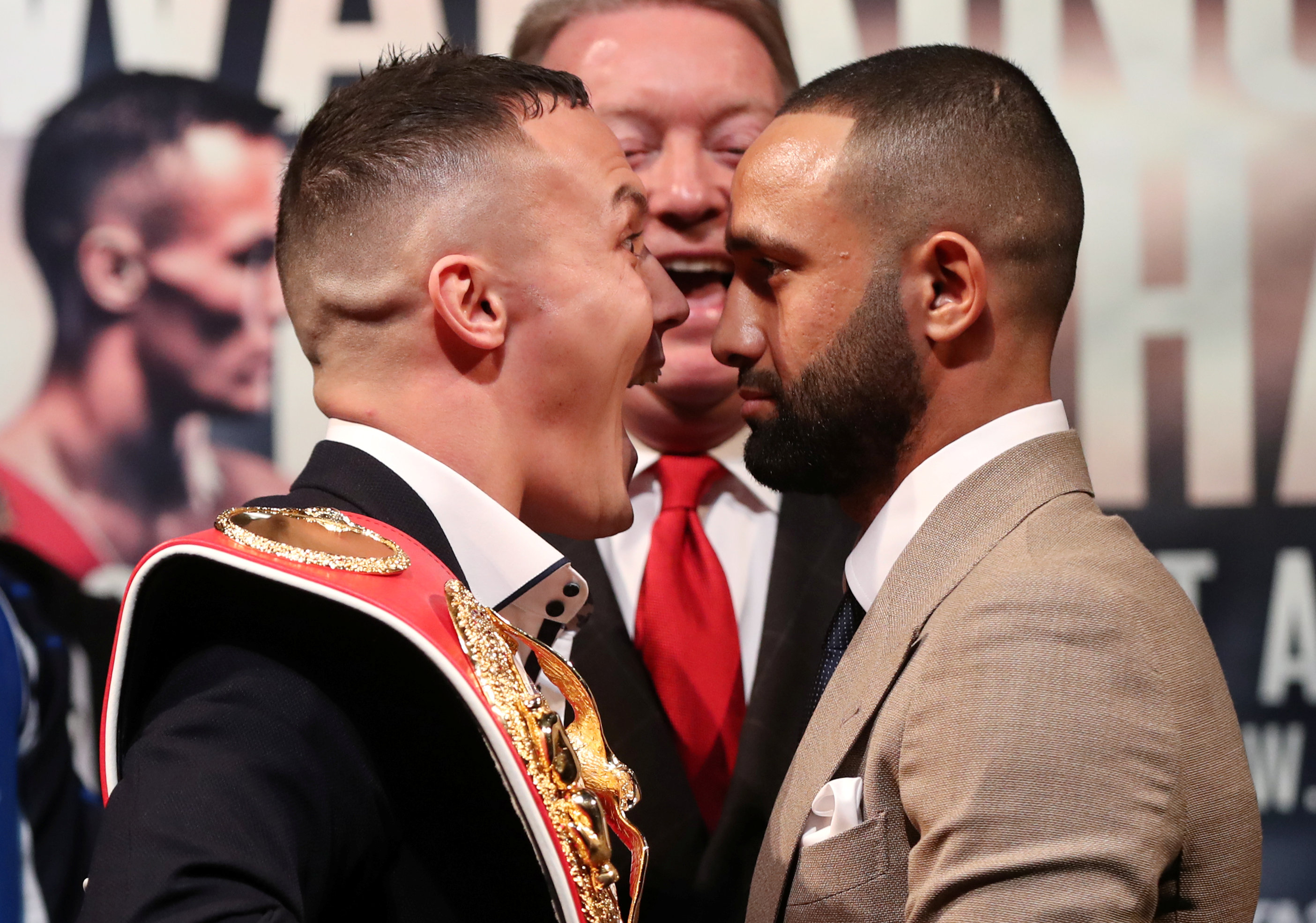 Josh Warrington, currently my favourite British boxer, makes the second defence of his IBF world featherweight title against Abdul Barry Awad at the FD Arena in hometown Leeds on June 15.

Abdul who? What’s this, a change of opponent? Wasn’t he due to meet that sprauncey lad from Sheffield, Kid Galahad?

Actually he still is. Kid Galahad is one of multitude of boxers who have changed the moniker they were born with to make another name for themselves in the ring.

Abdul Barry Awad became Kid Galahad after a chat with his late trainer and mentor Brendan Ingle, who thought a more flamboyant soubriquet would make him more saleable to the punters and the public, and save MCs getting their tongues in a twist.

It was also that sage old imp Brendan who dreamed up a new name for another member of the Wincobank stable who already had a name to conjure with. Back in the nineties he turned colourfully christened Fidel Castro Smith into one Slugger O’Toole. Ingle’s idea was that with that name the super-middleweight would build a big Irish following – despite the fact that his heritage was nearer to Africa than Antrim.

Galahad’s own career has been as bizarre as his new name. He has a swaggering demeanour, brimful of confidence bordering on cockiness with an unbeaten 26-0 record, including the European, British and Commonwealth super-bantamweight belts, albeit amassed largely against opposition from faraway places with as strange sounding names as his. Among them are Brayam Mairena, Toka Khan Clary, Ivan Ruiz Morate and Fred Mundraby. Hardly from boxing’s Who’s Who. More like Who The Hell is He?

Nonetheless Galahad is a feisty, fast and fearless switch-hitter with a useful dig; though his fortunes were somewhat blighted five years back when after being Voted Young Boxer of the Year by the Boxing Writers Club he subsequently failed a drugs test and received a two years ban after imbibing a protein drink laced with an prohibited anabolic steroid substance that might well have been sounded like one of his old, opponents: Stanazolol.

He claimed that the drink had been spiked maliciously by his brother Mageed following a row over money.

There is no doubt that 29-year-old Galahad will give Warrington a decent scrap. But to my mind Josh is both physically and mentally superior, with an ingrained hardness born of a Yorkshire resolution that is irresistible once he starts steaming forward.

As it happens Galahad was not the first Kid on the blocks to change his name. The legendary Cuban Kid Chocolate, a star of the thirties era, was born Eigio Sardiñas Montalvo.

The name-changing trend dates almost from the birth of gloved boxing. Prior to the 1920s there were few noteworthy American boxers of Italian origin and only a limited presence in the decades that followed. So behind many Irish boxing names there frequently stood an olive-skinned, dark-haired battler with a hidden identity. More than one thousand Italian professional boxers went by Irish pseudonyms.

Italian immigrants entered boxing at a time when the booming American economy took advantage of Italian muscle to fuel the nation’s growth. However, the ruling elites – the very ones who benefited from cheap labor – disparaged Italians, describing them as “biologically incapable” and a “burden on America.”

Italians feared the Irish controlled police force leading some to change their names.

This included one Peter Robert Gagliardi, who changed his name to Bobby Gleason in an attempt to keep the Irish cops from beating him up. Gleason later became a boxer before opening the famous Gleason’s Gym in the Bronx, a place where the likes of Muhammad Ali and Mike Tyson trained.

Of course Muhammad Ali (aka Cassius Marcellus Clay) was the most illustrious fighting figure of all to change his identity. When he shook up the world by first beating the ogre Sonny Liston and then announcing his conversion to Islam in 1964, his boxing brother followed suit. Rudolph Valentino Clay thus became Rahman Ali.

Muhammad Ali’s wily cornerman Angelo Dundee was also a name changer, but not to an Islamic one. He was originally Angelo Mirena.

Before Ali the best-known world heavyweight champ to change names was the record holding undefeated Rocky Marciano, who was brought up in the Italian quarter of Brockton Massachusetts as Rocco Marchegiano.

Others famous fighters who nominally re-invented themselves include Sugar Ray Robinson, who changed from Walker Smith as there was already a registered boxer of that name when he turned pro; Jersey Joe Walcott was once Arnold Cream (don’t blame him for dropping that one) and the old mongoose Archie Moore had swopped from Archibald Lee Wright.

Two famous old-time Jewish fighters from the UK, Ted ‘Kid’ Lewis and Jack ‘Kid’ Berg were originally Gershon Mendelhoff and Judah Bergman respectively. Both were called ‘Kid’ because that’s what they were when they became professionals in their early teens.

And how about a unique double name changer. Matthew Saad Muhammad, who twice beat John Conteh in Atlantic City was born Matthew Antonio Loach and then became Matthew Franklin before settling on his adopted Islamic name.

Marvin Hagler is now Marvelous Marvin Hagler, an officially registered prefix which makes him one L of a fighter.

Back in the UK, former British heavyweight champion Brian London was born Brian Harper, but took his father Jack’s fighting name. London, 84, still lives in Blackpool. And did you know that Barry McGuigan’s birth certificate reads Finbar Patrick Barry McGuigan? And get this. Anthony Joshua’s full name is Anthony Oluwafemi Olaseni Joshua. Over to you, Michael Buffer…

SOME REFLECTIONS ON an enthralling Stevenage slugfest:

Billy Joe Saunders could have danced all night and I could happily have watched him do so. I enjoyed every one of the 36 minutes in which he became a two-weight world champion by acquiring the WBO super-middleweight belt. I have heard some criticism that he did not knock out or stop a very moderate opponent in Shefat Usufi.

But the peek-a-boo Albanian came to survive and in doing so he allowed Billy Joe to put on another twinkle-toed exhibition of pure boxing craftsmanship in the manner which so bewitched David Lemieux.

At least Usufi did manage to land one on the Saunders whiskers which showed Billy Joe can take a whack.

Whether the Saunders shuffle would keep either Canelo or Triple G at bay back down at middleweight is another question, and one that TV would pay good money to watch.

On the subject of TV is there a more even-handed and astute pundit than Saunders’ former foe, Andy Lee? BT should snap him up as a regular before someone else does.

And Frank Warren has potentially a new golden nugget in teenage prodigy Dennis ‘The Menace’ McCann, a bantamweight who biffs with Dubois-like explosiveness. I think McCann is the best British 18-year-old have seen since Olympians Amir Khan and BJS turned pro with Frank.

As his manager Alan Smith enthuses:”He is an amazing talent, a superstar in the making.” Early days yet, but he may well be right. Watch this space.