NO MARKING TIME FOR ME 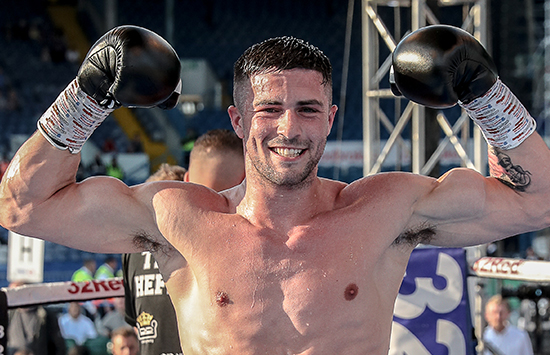 Mark Heffron is rapidly emerging as a force to be reckoned with in the middleweight division. Now 20-0 (16 via stoppage), ‘Kid Dynamite’ took home a first belt last time out by winning the WBC International title by employing his customary firebrand style against the resolute Andrew Robinson, who had never been stopped previously. Currently awaiting a date for the new season, Mark reflects on the upturn in his career prospects in his latest Fighter Diary…

THERE HAS BEEN a huge turn around in my career over the last 15 or so months since I teamed up with Frank Warren. I have fought on six occasions – including two non-TV shows – and it is the activity that I really needed.

When you are busy, the stuff you are working on in the gym you can transfer into fights and that is what I have been able to do. After starting out fighting in places like Holland and Spain in little fights to just get me noticed, I have now really got going with my career at 20-0 and a first title won in my last fight at the Manchester Arena in June.

I fought for the WBC International middleweight title against Andrew Robinson, who had not been stopped before, so I was able to make a bit of a statement by stopping him in the sixth.

It was similar against Lewis Taylor in Newcastle back in November when he was stopped for the first time. It is fights like this that will fast forward my progress and get me the fights I want to be in.

It is getting me noticed and that is what I need.

I am absolutely buzzing over holding a green belt and it is something I have always wanted. I just want to keep winning more and more now.

What I also did during this period of time is move down to middleweight and that is the best move I have made. I am bigger at the weight, stronger, fitter and faster.

People ask if it is harder work making 160lbs, but is it ‘eck. I really haven’t noticed much difference. I don’t feel any different and I am still doing the same things as I was doing before.

The WBC belt I have gives me a ranking but I still want to go for the British, definitely. The IBF Intercontinental has become vacant so my idea would be to go for that in September or October, then I have definitely got a shot at the British in December against the winner of Jason Welborn and Tommy Langford.

I am in the best possible place to make this happen now I am able to train on a daily basis with my trainer and manager Kevin Maree. I know people might think I have hopped around trainers over the last 18 months or so, but the fact is I never left Kevin. It was just that I struggled to get over to his gym from where I live.

This is why I spent some time with Pat Barrett and Ricky Hatton, but I am now back full-time with Kevin and it is not so much of a problem getting over there, although it takes me around an hour and 15 minutes every morning.

It is a big commitment but it is what I want to do and what I am happy to do, despite having to put £60-70 in the car every week.

It is about always wanting to improve myself as a boxer. Even though I have stopped 16 out of 20 opponents, I never go into a fight looking for a knockout.

If one comes then I am buzzing, but I am not bothered about being taken the distance because, if anything, it will do me the world of good getting the rounds in and I don’t get frustrated by it.

When you both start tiring in the ring, that is when the work you do in the gym really comes into play. I haven’t really had the opportunity to draw on this yet but as I step up it is bound to come.

The headliners in my division at the moment are the likes of Billy Joe Saunders and Martin Murray and hopefully I will be ready for them by the end of next year.

That is when my time will come.