NO NIGHT FOR CHANNEL HOPPING 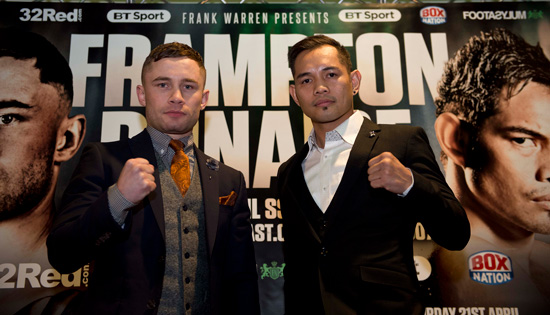 IT IS NEVER ideal when televised boxing ends up going head to head, but I still wouldn’t imagine there will be too much channel hopping going on in the homes of fight fans come Saturday night.

People who know their boxing will tune into BoxNation or BT Sport at 7.30pm and stick with it right through to the end because the formbook suggests it should be edge-of-seat from start to finish.

I simply don’t see how you can compare what will take place in Belfast to the Amir Khan card that will occur at the same time in Liverpool.

There is no comparison.

The matches featuring Tyrone McKenna-Anthony Upton and Conrad Cummings-Luke Keeler have been fantastically well received by the boxing public and are both genuinely too close to call.

But that is just for starters!

The brilliant Zolani Tete makes a mandatory defence of his WBO world bantamweight title against the 48-2-2 Omar Andres Narvaez, who is a two-weight world champion.

Tete made quite an impression on the Belfast people back in November with his world record for the fastest knockout ever recorded in a world title fight and he is coming back looking for more of the same.

Carl Frampton is obviously the headline attraction and his fight against four-weight world champion Nonito Donaire has all the makings of a classic encounter.

You cannot say the same about the top of the bill in Liverpool, although I understand the need to ease Amir back in after two years out of the ring.

We will be dealing with a similar scenario where Tyson Fury is concerned soon enough after his lengthy absence, but you have got to give the fans some value for money and the rest of the card looks substandard with no great fights on there.

True, Tyson won’t be taking on any world beaters straight away, but the business end of our June 9 show in Manchester is all about Terry Flanagan seeking to become a two-weight world champion against Maurice Hooker – and I assure you that you won’t be disappointed when we reveal the rest of the card.

Aside from the showbiz element following Amir’s stint in the jungle, there isn’t much to get excited about going to happen at the Echo Arena. Belfast is the place to be for a real fighting card with genuine depth and great value.

As for Carl, I spoke to him over the weekend and he is a good place and he knows this is a tough, tough fight for him against Donaire.

People might say this one is make or break for him and it probably is. It is not one he can afford to lose, that is for sure

If Carl did dip below his normal standards in the second half of his return fight last time out, you do have to make some allowances. There was such a lot going on in his life at the time, with numerous changes to his team, as well as legal proceedings hanging over him.

I thought he was harsh on himself but I fully expect him to be back to his old self this time and I also believe we have got a potential thriller on our hands.

TYSON FURY RETURNED to the main stage in front of the massed ranks of media on Thursday and showed himself for what he is. Composed, articulate, humorous and very open.

I thought he handled everything extremely well on the day and he is clearly galvanised by the prospect of his return to the ring on June 9 in Manchester.

He looks in rude health and is reaping the benefits of all his hard work in the gym. In the nicest possible way Tyson has got his swagger back and I hope this continues for him.

The only downside of the afternoon was the posturing and ambush questioning attempted by an ITV news reporter when his turn came to grab a word with Tyson. The exchanges, widely posted across social media, were disappointing and unnecessary because it has all been addressed previously and Tyson is embarking on a new beginning after hitting a low point in his life.

I have never noticed them dredging up the past of Anthony Joshua during press conferences and nor should they. The same should apply to Tyson.

It wasn’t an occasion to get ahead of ourselves – even though the name of Anthony Joshua inevitably became entwined in conversations – because we all know Tyson is at the beginning of a rebuilding job and he will be given all the time he needs before being restored to world title contention.

There is no rush, he will feature on really strong cards and this will hopefully allow everyone to be patient with him.

The response from the fans at the Box Office has been tremendous with a really big take-up for his long-awaited return on June 9.

THERE WAS A fantastic development for BoxNation subscribers last week with news of the renewal of our exclusive output deal with Top Rank to continue the screening of the top US shows to UK fans.

I am delighted BoxNation is extending our association with Top Rank, which provides a fitting UK platform for the likes of Terence Crawford and Vasyl Lomachenko.

An early bonus from the renewed broadcast partnership is the exclusive UK rights to one of the biggest fights of the year between Lomachenko and Jorge Linares on May 12, as well as Crawford’s attempt to become a world champion at welterweight against Jeff Horn on June 9.