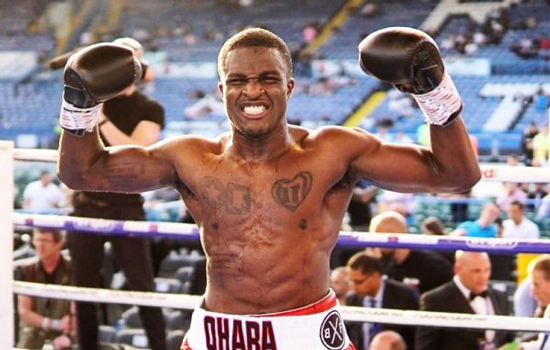 Hackney Super-Lightweight Ohara Davies appears to have rekindled his mojo after signing with Hall of Fame promoter Frank Warren earlier this year.

Bull strong and mallet fisted, the incorrigible trash-talker returns to the championship stage at London’s O2 Arena on Saturday in a WBC Silver Super Lightweight challenge to Congo’s 21-1 Paul Kamanga.

‘Catterall’s not a big thing on OD’s radar. He’s not a big name, doesn’t sell. My main focuses are getting my own back on my sole conqueror (Josh Taylor) and becoming world champion,’ claims the outspoken Davies who has triumphed in 17 of 18 pro starts, with 13 often spectacular stoppage wins, since debuting in April 2014.

‘But Frank and MTK (who promote and manage both) seem keen to make the fight happen and, provided I come through on June 23rd and Jack comes through unscathed the following week in Belfast, it could be next for both of us. I’d certainly be ready for September.

‘I’m very confident I’d win. He’s not beaten anyone on my level and, other than Tyrone Nurse, has just disposed of bums, albeit in good fashion. When we meet, Catterall will painfully learn that boxing is about levels. I don’t just talk trash, I know how to fight.’

A comprehensive victory over recent British champion Catterall would authenticate Davies as a worthy world title contender and Ohara is adamant over which champion he is targeting.

‘Maurice Hooker came over here, beat one of our fighters. He needs showing that WBO belt belongs here in the UK,’ states the 5ft 7in strongman who went undefeated through an 18 bout amateur career.

‘We had a six round spar at the Mayweather Gym in Vegas in early 2014. At the time Hooker was 12-0 and just about to debut on Showtime, while I was still amateur.  At the end of the first round, he hit me so hard with a right cross that I nearly went down. Thankfully I was saved by the bell. But, no word of a lie, after that, once I’d worked him out, I won the remaining five rounds easily.

‘I thought Terry Flanagan deserved the victory over him at Manchester Arena last weekend. Hooker’s shots did no damage whereas Flanagan was much more aggressive, had the higher work rate throughout and landed more clean shots. At one point, I even thought Flanagan was going to stop him…..and I don’t particularly like Flanagan.

‘I certainly think Hooker would be an easier fight for me than Flanagan would have been. Styles.  Once you work Hooker out, you can get him. I’ve longer arms, I’m faster, I hit harder and can match him for work. He doesn’t work. He can’t get out of the low gears.’

It’s bold talk again from a man who failed to deliver on some audacious pre-fight braggadocio in a high-profile Commonwealth clash against unbeaten Edinburgh Olympian Josh Taylor in July 2017. That night, an uncharacteristically sedate Davies was stopped in seven.

‘It was a bit embarrassing given how I’d spoken out beforehand but it’s my character to be a loud mouth. If I don’t like you, I’ll talk sh** and Taylor and his team are a bunch of weirdos,’ said Davies.

‘Josh fought a good fight and won. That fight taught me not to concentrate too much on strength and conditioning because it’s already in my genes. I’m naturally muscular. I over focused on that and it took away from my speed, timing and footwork. One day, I hope to get my own back. But  I’m still so confident, in fact even more confident under my new team.’

Earlier this year, he ended his association with Tony Sims and resurfaced under West Ham coach Carlos Moreno.

He explains: ‘I’ve been training with Carlos on the side for the past few years cos I couldn’t get direct coaching with Sims who has a big squad.

‘Training lately has been so good. I’ve been much smarter, much sharper in spars and felt massive improvements in my last fight (a six round shut-out over Ahmed Ibrahim) at Elland Road last month, from my previous stoppage win over Tom Farrell whilst still under Sims.

‘That said, I’m glad the fight wasn’t televised live because it allowed me to just shake-off the rust and get used to my new team. There was no pressure to impress. Now I’m ready to shine again.’

He promises BT and BoxNation subscribers and ticket-buying fans that he’ll be back to his explosive best when he swaps leather with the 24 year old Kamanga in Greenwich next weekend.

‘Elland Road was about acquiring experience. I was told not to unload but I’ll be under no such instructions to conserve at the O2. I’ll be looking for total annihilation, to remind fans how fast, sharp, strong I am,’ he concludes.

‘Expect all those calling me out lately to have a rethink, afterwards. OD’s not a man you want to go calling out!’