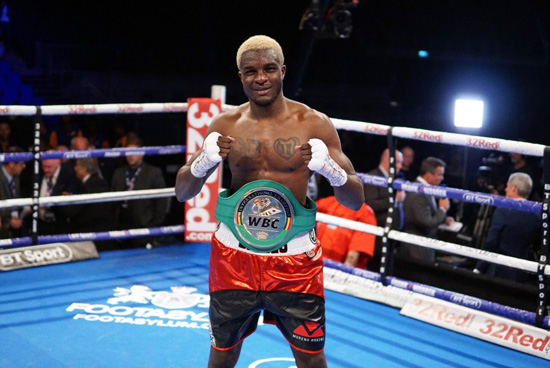 OHARA DAVIES is hoping for a sensational double knockout when his arch rivals Jack Catterall and Tyrone McKenna clash this weekend.

Controversial Davies said: “At ﬁrst I wanted Catterall to win, but I don’t give a damn. I want them both to lose so hopefully there is a double knockout or a draw.

“If there was a double knockout that would be perfect. I would be the happiest man alive if that occurred. “To be honest, I don’t think McKenna is very good and he is going to get spanked inside ﬁve rounds by Catterall.

“McKenna knows how to talk a good game, but I don’t think he has any talent whatsoever.

“I was going to go to Belfast and watch the ﬁght, but I have decided to stay safe and watch on TV. I don’t think I am a fans favourite in Belfast.”

Davies delivered one of the knockouts of the year on Saturday when he knocked out Paul Kamanga to claim the WBC International crown.

Promoter Frank Warren is likely to match the winner of this weekend’s mouth watering clash which is televised by BT Sport against Davies in their next ﬁght.

Davies added: “I will ﬁght whoever Frank puts in front of me  – the winner of Catterall v McKenna, even Maurice Hooker who beat Terry Flanagan.

“I have passed Catterall and McKenna proﬁle wise so I am not looking up to them.  They are looking up to me. Beating me does them more good then me beating either of them.

“They are both jealous that I have signed to Frank and I am getting all the exposure on a platform they have been on for longer.

“They have to accept sometimes that I am a bigger ﬁghter than them both. I am more known than them and I sell more tickets than them.

“Catterall – I do think he is such a good ﬁghter but he isn’t known and cannot sell. Sometimes you have to accept that, but he hates on me because I sell.”

There is an all Dublin rematch when Jono Carroll defends his IBF intercontinental crown against Declan Geraghty.

When they met in November 2014, Geraghty was ahead before he was disqualiﬁed in the fourth round. In a clash of unbeaten hopefuls, Derry’s Tyrone McCullagh meets Glasgow’s Joe Ham in a vacant Celtic super-bantamweight title clash that doubles as a British championship eliminator.