ON-WARD AND UPWARDS FOR BOXNATION

The live action continues on BoxNation this weekend from the Oracle Arena in Oakland, the home patch of one of the pound-for-pound greats of the sport. 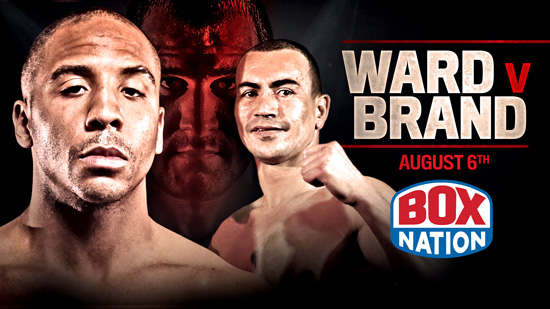 Andre Ward calls himself ‘Son of God’ and, while that might be stretching it a bit, he is something special. He beat everyone who was there to be beaten at super middleweight, emerging unscathed from the Super Six tournament, defeating the likes of Mikkel Kessler, Carl Froch and Arthur Abraham – all well respected world champions in their own right – when they were in their pomp.

It has been well documented that promotional wrangles deprived boxing of this fine talent for 19 months and, after such a period of inactivity, it was always likely he would have to shift up a weight on his return.

But he had more than proved himself at 168lbs and now he is ready to truly mix it with the light-heavy mob.

The fearsome Sergey Kovalev awaits in November, which will be a real humdinger and the type of contest in which I always favour the boxer, but first Ward must negotiate the obstacle posed by Alexander Brand, who only has one blot on his copybook.

It is to Ward’s great credit, given what is at stake, that he has opted for a tough examination but, truth be told, everyone will be expecting the same outcome and then the build-up to his date with Kovalev can begin in earnest.

BoxNation viewers will again witness ring craftsmanship of the highest order from Ward and it is something they are becoming accustomed to on the Channel of Champions.

Even just looking back over the last year or so, the biggest fights keep on landing on BoxNation. Golovkin-Lemieux, Canelo-Cotto, Canelo-Khan, Crawford-Postol and Frampton-Santa Cruz to name but a few, along with regular screenings of the likes of Errol Spence, Roman Gonzalez, Kovalev and Vasyl Lomachenko.

We have the best fights booked in for the forthcoming months, with the long-awaited return between Tyson Fury and Wladimir Klitschko set to be rescheduled, Liam Smith’s Dallas date with destiny against Canelo, while confirmation of Billy Joe Saunders’ first defence of his WBO middleweight title will arrive soon.

BoxNation continues to go from strength to strength and will carry on doing so. It is the place to be for fans of the sport and, pound-for-pound, the undisputed best channel for boxing.

Jack Catterall was no doubt an interested observer at last week’s show in Leeds when British super lightweight champion Tyrone Nurse made a successful voluntary defence of his title against Tommy Coyle.

The Chorley boy is mandatory challenger for Nurse’s belt and this is just the sort of test Jack needs at this point in his career. It will be a tough, no question about that, because Nurse is an experienced and canny operator.

I believe Jack to be an excellent young fighter with a big future ahead of him and this fight will represent a staging post in his career – win well and the big fights will come thick and fast.

The 23-year-old southpaw has never really had it easy and that is the way he likes it. Only on one occasion after his first four fights did he meet anyone with a losing record and, in his ninth and tenth outing, he stopped the previously unbeaten Liverpool pair Nathan Brough and Tom Stalker.

He is ranked at five by the WBO and handily placed to push on for world honours, but first he has domestic duties to attend to and, although he will have his work cut out against Nurse, I am sure it will be an occasion he will rise to.