ONE MORE WIN FOR JOSH AND THERE IS NO HIDING PLACE 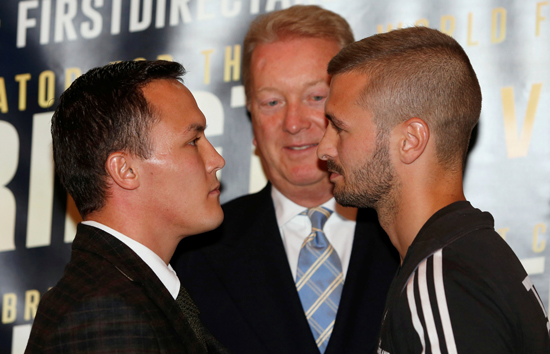 THIS WEEK WE gathered in Leeds to launch the promotion of our visit to the FD Arena on October 21 where the local lad made good, Josh Warrington, will hopefully negotiate the final step towards a shot at the IBF world featherweight title.

It is fairly well documented that we sought to create a shortcut for Josh and made a hefty offer to the team of the current champion Lee Selby but, ultimately, the nature of the demands made told us they do not want the fight at this point in time.

We worked hard on it and we reached agreement financially, but we were not prepared to succumb to the various other stipulations, so we have opted to force the issue by going down the mandatory route.

To that end, the IBF ordered a final eliminator against the unbeaten Dane Dennis Ceylan and the winner of the fight gets the keys to the gate and Selby – or whoever is champion early next year – will have no alternative but to take on the mandatory challenger if he wants to keep his title.

If we cannot agree terms next time around, we will go to purse bids and it will be a straightforward process. There will be no giving away options on future fights or agreeing to vacate the title in the event of Selby getting beat.

We have invested a lot of time and money in bringing top quality boxing bills back to Leeds, we are working hard on it in conjunction with a good group of people up there and we just want it to be a success story.

October 21 will be a top class show, with excellent main events and competitive fights right down the card. It is a bill that will be bolstered even further once our big show at the Copper Box on September 16 is done and dusted, so watch this space for further news.

Josh knows that securing the mandatory spot is not a foregone conclusion and there is an equally ambitious opponent standing in his way.

Due to the question of Selby being asked and answered, Ceylan probably believes he is being overlooked a bit, but it is not in Josh’s nature to focus on anything but the job in front of him.

I believe this could be the fight where everything really clicks for Josh and transports him to a new level. He never made any sort of fuss when he banged his hand up very badly during his last fight against Kiko Martinez and he still came out punching right to the final bell.

Ceylan means business too and I looked at them both when they were eyeballing each other and he didn’t blink for a second. I’m telling you, he really fancies it.

This, of course, is good news for the fans in the arena and those watching on BT Sport and BoxNation.

Our four championship fights are all tough ones to call and that is the way it should be. Obviously we are backing our guys to come through, but they will not be having it easy.

All said and done, we are promoters for the fans, that is what we do and I just want to keep making fights that fans want to see.

Yes we have got youngsters coming through and there may be fights that will be 70 per cent in their favour, but with the headliners they are all pretty much 50-50 fights.

None more so than the intriguing British super lightweight title fight between the champion Tyrone Nurse and young Jack Catterall.

The winner of this one will hit the jackpot because he will near enough be in pole position for a shot at the world title.

There are other fascinating contests that I will talk about more in the coming weeks but, to my mind, there is only one place to be on October 21 and that is the hugely atmospheric bear pit of an arena in Leeds.

Coming up next: The latest from Billy Joe Saunders’ personal fight diary