ONE TO STICK ON THE MANTELPIECE 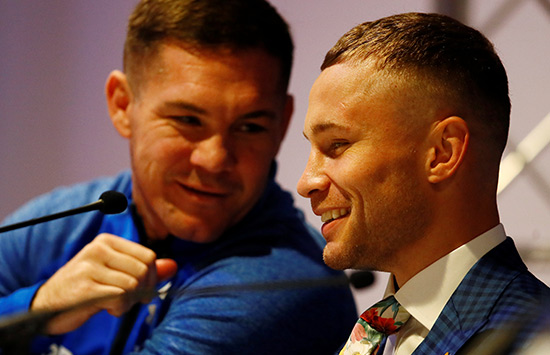 Carl Frampton bids to become the WBO Interim world featherweight champion on Saturday night when he takes on Nonito Donaire in Belfast, live on BT Sport and BoxNation. Should he be successful, don’t expect the city’s favourite son to start describing himself as a world champion, as he explains himself in his latest exclusive Fighter Diary…

THE FACT THAT myself and Nonito Donaire are fighting for the WBO Interim world title at the SSE Arena this weekend is simply the cherry on the cake because I know what it is. The fight is a final eliminator to fight Oscar Valdez, which gives us another option when it comes to fighting for a world title.

Obviously the winner out of Selby or Warrington is one too.

People in the past have called themselves world champion for winning Interim titles, but I am not going to do that. It is a belt that you get for winning a final eliminator, which is nice because you can stick it on the mantelpiece or in the cabinet and it would be nice to have because I haven’t won anything from the WBO yet.

So it would be a nice belt to add to the collection, but I know it is just a final hurdle ahead of a shot at the world champion, who is Oscar Valdez

I genuinely do like the Valdez fight because he is a good fighter and it would be an exciting fight. These are the fights that excite me because I like to get stuck in and like to have tear-ups!

I like to be involved in fights that people remember and talk about for a long time. I think a fight against Valdez would be exactly that.

He is a puncher, a clever boxer at times as well and, as we saw against Quigg, he is very gritty – coming through with a broken jaw.

He beat Quigg comfortably. Quigg had good spells in the fight, but Valdez won it well. He is, however, very, very hit-able and I think I would be able to take advantage of that.

The problem with a potential fight with Valdez is we don’t know how long he will be out for and that is why this interim title has been put in place.

I am hoping to be fighting at Windsor Park before the end of the summer and hopefully Oscar Valdez is ready.

I often get asked as to how I view the current pecking order in the featherweight division and I think you have to have Leo (Santa Cruz) at No.1 at the minute because he is the WBC champion and has proven himself by beating me and beating Abner Mares.

So he would be No.1 and after that I would say Valdez because he is a champion and probably No.2. I wouldn’t put myself in those positions because I don’t have a title.

Then you would put Gary Russell and after that Lee Selby. They are the four champions and I put them in that order.

But, I believe I can beat any one of them. I will be respectful towards them though because they are champions and I am not going to say I am ahead of them in the pecking order.

I will beat them when I get the chance.

COVERAGE OF FRAMPTON-DONAIRE BEGINS FROM BELFAST FROM 7.30PM ON SATURDAY, LIVE ON BT SPORT AND BOXNATION