ONLY ONE WINNER IN THIS ONE 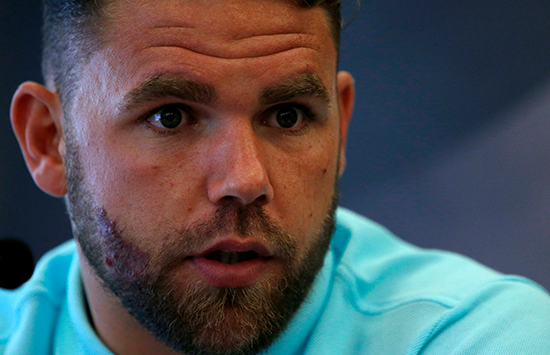 In his concluding exclusive diary entry before his second defence of the WBO world middleweight title at the Copper Box on Saturday, Billy Joe Saunders offers his final thoughts on the task ahead of him against Willie Monroe jr

A NUMBER OF people have asked me how I see my fight with Willie Monroe jr playing out on Saturday and what sort of fight I think it will be.

What I can say is that my confidence comes not so much from the ability I know I’ve got, but from the condition and shape I am in after three months or so of hard graft and expertly supervised nutrition.

To be quite honest, I don’t care what gameplan Monroe brings into the ring with him because I know it will have to be quite a masterplan to beat me with the way I am feeling at the moment.

Whatever he brings to the ring, I will have it ten-fold – no doubt about that.

I don’t know if Monroe is trying to send some sort of message or make a point by posting pictures of him standing over a light heavyweight in sparring.

That won’t do him any good because it is no use having light heavies out in sparring, he’s got to do it in the ring on the night, which he hasn’t done.

The only recent KO on his record was inflicted on him by Gennady Golovkin.

I’ve knocked out light heavyweights and cruiserweights before in sparring, but it doesn’t mean s**t. What matters is in that ring.

So how do I see this going at the Copper Box?

I’ve said it before, this fight will be as hard for me as I want to make it. That is how it will go.

I am feeling good, I know I’m due a good performance and I just want to get everything out of my system now.

Let’s face it, anything above my last performance in December against Artur Akavov is a bonus, isn’t it!

Personally, I don’t think I’ve got another performance as poor as that in me. I certainly hope not.

I do want to make a statement in this fight, but two little words that I am extremely confident of hearing will mean the most to me at the end of the night.