ONWARDS AND UPWARDS IN 2019 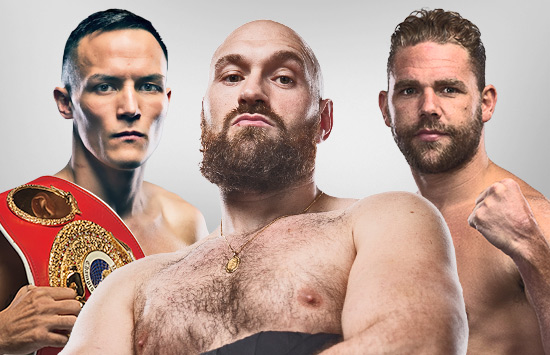 FIRST OF ALL, a little belatedly, I would like to wish you all a very happy and healthy New Year.

2018 was a year of many highs and a few lows, one that we ended in spectacular fashion with a December that saw Tyson Fury‘s incredible resurrection against Deontay Wilder in LA, followed by a night none of us who were there will forget when Josh Warrington and Carl Frampton produced one of the finest fights ever witnessed in a British ring.

The featherweights played a big part in our success of last year, starting at the SSE Arena in Belfast back in April when Carl Frampton reminded everyone of what a top operator he is by comprehensively overcoming the threat of multi-time world champion Nonito Donaire.

It placed Carl firmly back on the world map and our job then was to make his dreams come true. Firstly by fighting him at Windsor Park and secondly by steering him, once again, to world title contention.

The first part of the bargain was duly delivered in August on a compelling night of boxing that also saw Paddy Barnes challenge for a world title at flyweight in just his sixth fight as a pro and Tyson Fury take the second step towards fully announcing himself back on the world stage.

Before this, at Elland Road in Leeds, Josh Warrington also realised his dream of performing at the home of his local football club in May. It was a night that hit all the right notes for the Leeds Warrior, who was played into the ring by the Kaiser Chiefs before ripping the IBF world title from the champion Lee Selby.

Josh has been a remarkable story over the last year after we forced the issue to secure his shot against Selby via a final eliminator to him becoming one of the elite of the division. Few would have imagined him having successes against both Selby and Frampton on his resume at this stage of the game, but he is someone I believed in and got right behind from when we joined forces.

He is someone on the up and up and there will be more big nights for Josh in 2019. Hopefully the same will be the case for Carl – a true gent I hold in the highest regard – but we will wait and see what he decides to do after spending time with his family.

Josh and Carl really put the seal on a sizzling year for the sport at the Manchester Arena in front of their loyal hordes of supporters, who also made it such a memorable occasion. That they were rewarded with such a captivating contest is a result of putting the best in against the best – and that is what we strive to do as often as we can.

December was our second big night out in Manchester last year, with the cavernous arena also playing host to the return of Tyson after his lengthy hiatus in June. The place was packed and it was heart-warming to see the public really get behind Tyson after his well-documented troubles.

He deserves it because he is truly a man of the people who has time for everyone.

The downside of that night was Terry Flanagan coming up slightly short in his bid to become a two-weight world champion against Maurice Hooker and we have to get Terry back on track in 2019. The same goes for Liam Smith, who was bravely outgunned by a fine young champion in Jaime Munguia when he sought to reclaim his WBO world super welterweight title in July.

2018 was also a year when we delivered on our pledge to match our top young talents against each other in order to provide the best fights for the fans, as well as to speed the development of our prospects and contenders.

Jack Catterall – who is poised for a world title shot in 2019 – vs Ohara Davies didn’t live up to its thrilling billing and ended up being a tactical affair, but Archie Sharp-Lyon Woodstock, Zac Chelli-Umar Sadiq and Liam Williams-Mark Heffron certainly met expectations.

Hopefully we will be able to match more of the same this year because these are the fights the fans want to see.

I have very high hopes for our younger contingent this year and expect big steps to be taken by the likes of Anthony Yarde, Daniel Dubois, Nathan Gorman and Ryan Garner. I am looking forward the continued emergence of Sam Bowen – who defends his British super featherweight title against Ronnie Clark in Leicester on February 23 – and there are some exciting possibilities with rivals such as Zelfa Barrett, Archie Sharp and Lyon Woodstock all eager to step up. Sunny Edwards is also a young man to keep an eye on at Super Flyweight and it’ll be good to see how the likes of Harvey Horn and Joe Maphosa keep up their development around the lower weights.

Liam Williams showed that he is a classy operator at middleweight, as well as light middle, against Mark Heffron and we will see where we go next with him, while Mark will have learned from the experience and will come again, as will Ohara Davies after being edged by Jack Catterall.

I could go on and on and continue to reel off names but, the bottom line is, we want to make the fights that matter and that is what we will do.

Those are the only fights Tyson Fury is interested in after reasserting himself as the world’s best heavyweight. He may not have the belts, but he is top of the charts again now and we are working on his rematch with Wilder currently.

After that he will want Anthony Joshua and there is no reason from our side why this shouldn’t become a reality because it is a fight the British public will demand to see before too long.

Josh Warrington has got everything in front of him now he has proved himself to be the real deal and unifying titles is the obvious way forward for him.

I am also determined to make it a big year that counts for Billy Joe Saunders, who so unfairly had to relinquish his world title a few months ago. I would back Bill against any of the current champions and, mark my words, he will be back in the mix before too long and reclaiming lost property.

So there is much to look forward to in 2019 and the only way is up for our hugely talented stable of fighters. I would like to thank you for your tremendous support across 2018 and hope for more of the same this year, starting in Leicester on February 23 with many more dates for your diaries firmly in the pipeline.