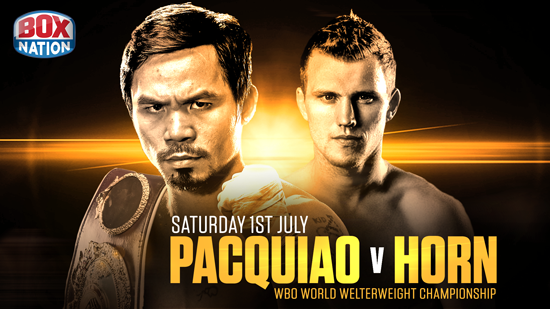 One of the finest boxers of his generation fights for the 58th time as a professional this weekend and I am certain BoxNation viewers will seize the opportunity to witness Manny Pacquiao in action once again as the Filipino thoroughbred enters the home straight of his thrilling journey.

I expect the heartfelt tributes to the career of the sprightly and still spiteful 38-year-old have been written for some time but, despite more than a few hints, he has resisted calling it a day just yet and it looks like he is taking his show on the road for his last few fights.

In the early hours of Sunday morning he will be performing in far-flung Brisbane at the Suncorp Stadium, where Bob Arum tells me they have shifted in excess of 50,000 tickets, so there should be some atmosphere there.

The Queensland public are obviously embracing having a legend of the sport fight in their state and the fact he is taking up the challenge from a Brisbane native will make it a memorable occasion for the locals.

If Pacquiao was in his prime you wouldn’t give the Aussie, Jeff Horn, a prayer of pulling off a shock win.

The fact is, Pacquiao has got miles on the clock and we just don’t know how much he has got left in the tank. He keeps on pulling convincing victories out of the hat, but there will come a time when the old magic simply isn’t there anymore.

Whether the 16-0-1 Horn is the man to capitalise on any decline remains to be seen, but he is a Top Rank fighter so the canny Bob must see something in him.

Hopefully Horn will give a good account of himself, but it would also be fitting for Pacquiao to go out in a blaze of glory.

Someone who holds the distinction of being the only eight-division world champion and the winner of 11 world titles deserves nothing less.

If Pacquiao’s ‘world tour’ does extend beyond Down Under, I hear Bradley Skeete would love to roll out the welcome mat in London.

I’d love to do that fight and who knows what happens after this one. Brad is fighting in a couple of weeks time, so we will see where we go after that.

Not many people would have expected to see Pacquiao in with Horn, so with Brad ranked No.3 now with the WBO, it is not an unrealistic prospect.