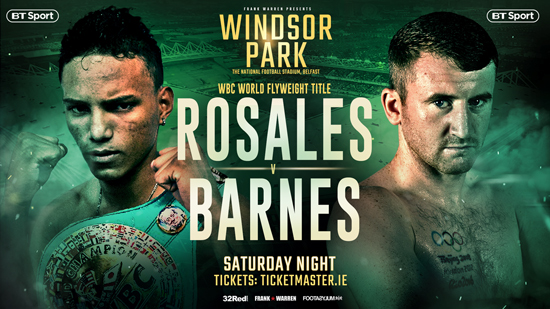 Paddy Barnes will start televised proceedings on Saturday August 18th when he challenges WBC World Flyweight champion Cristofer Rosales for his world championship in front of a home crowd in Belfast at the city’s national stadium, Windsor Park.

“This is a massive bonus for Paddy fighting straight after the Arsenal-Chelsea match, it means there will be an even bigger audience tuning in to watch him for his big world title fight.” said boxing promotor Frank Warren; who also had a message for the fans heading to Windsor Park on August 18th:

“Get yourself in the stadium nice and early, grab a drink and enjoy an excellent night of world class boxing. Let’s hope it will stay nice and dry for everyone!”.

Amateur stand-out Barnes has two Olympic bronze and two Commonwealth Gold medals to his name and will be looking to add a professional world title to that collection on August 18th.

This will only be Barnes’ sixth outing as a professional after being fast-tracked to world title contention. In his most recent fight Barnes impressed by stopping tough Nicaraguan, Eliecer Quezada in the sixth round; a fighter who narrowly lost to upcoming opponent Rosales with a split decision just seven months before.

The WBC Flyweight king, Cristofer Rosales will be making his maiden title defence in Belfast after stopping the unbeaten Japanese fighter, Daigo Higa in Japan in which was a major upset.

The 23-year-old Nicaraguan already has thirty fights as a professional but has previously lost to two undefeated Brits in Andrew Selby and Kal Yafai. Rosales will be fighting to make it third time lucky against British opposition when he faces Barnes, along with retaining his WBC strap.

Fellow Belfast native and good friend of Barnes, Carl Frampton will be headlining the Windsor Park event when he defends his interim WBO World Featherweight title against Australia’s Luke Jackson.