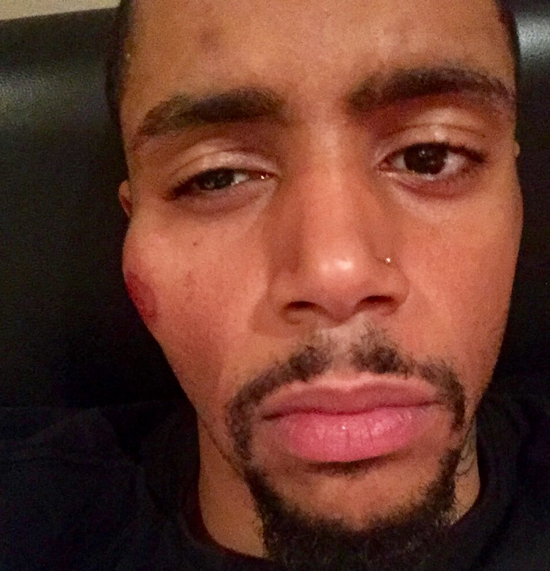 Dulwhich Super-Welterweight Ahmet Patterson has been forced to withdraw from his British title showdown with Welshman Liam Williams after being attacked whilst out running late on Thursday night.

Patterson, 29, suffered injuries to his head and right eye after being struck by a brick whilst running past a group of three men in London. The undefeated Peacock Gym fighter was struck on the head as he ran past the three men who attempted to block his path.

“I was doing my road work when I noticed a group of men gathering on the pavement around 50 yards in front of me,” said Patterson. “I tried to run around them but they moved in front of me and blocked my path.

“As I ran around them one of the men struck me in the face with a brick and we got in a scuffle. Once I started defending myself they ran off.”

The injuries suffered left Patterson with no choice but to withdraw from his challenge for the Lonsdale Belt this Saturday night at the Motorpoint Arena in Cardiff.

“It’s incredibly frustrating as I’ve been preparing for this fight for the past two months. I was in the best shape of my life and ready to win the British title. I’m absolutely gutted that I’m going to have to pass on this fantastic opportunity.

“Once my injuries have healed hopefully I’ll get another crack at the Lonsdale Belt. This is a gutting setback but I’ll be back stronger than ever and ready to take my place at the top of the domestic Super-Welterweight scene.

“I feel for the fans who were looking forward to my fight with Liam but some things in life are out of your control.”

Clydach Vale star Williams will now face Hungary’s Gabor Gorbics for the Vacant WBO European Super-Welterweight title. Gorbics, 29, holds a top record of 22 wins, 13 coming via knockout, and 4 losses after turning professional at the back end of 2012.

Gorbics lost on a points decision to former Russian amateur machine Radzhab Butaev earlier this month when he fought him for the Vacant NABF Super-Welterweight title in Connecticut, USA. The Budapest fighter has held the Hungary Super-Lightweight, Slovakian Welterweight and interim Hungary Welterweight titles.

“Obviously I’m disappointed as I was expecting a tough fight against Ahmet and it would have been exciting for the fans while it lasted,” said Williams. “Unfortunately things like this happen in boxing and we have to just get on with it.

“I’m fully focused on securing the WBO European title. It’s another belt to add to my collection and I’m going to put on a show for everyone who is coming out to support me. Ending 2016 on a high is important but it won’t be easy against a strong fighter in Gorbics.

“They’ve done well to bring in a decent opponent at such short notice and I’m expecting a tricky fight. He recently went the distance with rising Russian talent Radzhab Butaev but I’m confident of getting the win.”