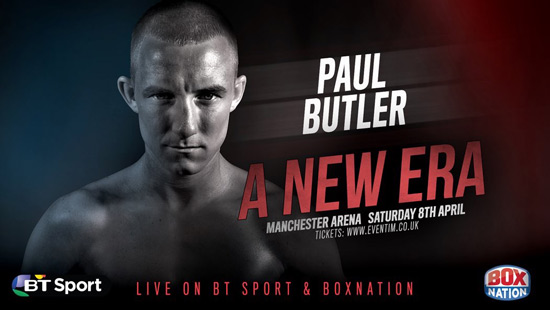 Amidst the talent stacked card at Manchester Arena this Saturday, brilliant former IBF bantam boss Paul Butler undertakes what should be a final audition for the right to return to the world championship ring this summer.

After four successive stoppage wins following your world title defeat, you’ve twice been extended the full ten rounds by Mexican imports since resurfacing at bantam last autumn. Is it a struggle to shift the bigger boys?

No. When I finally get someone who stands in front of me and throws some shots, I’m very confident that my power will be even better than it ever was at 115 (lbs). I’ve always had the mindset that if you can get ‘em out of there, you get ‘em out of there. I’ve never been one for ‘getting rounds under my belt’, I’ve never carried anyone.

Ability wise, neither Mexican was in my league but both were pretty tough kids who came to have a go. Alexis Ruiz was quite cute whereas the last one (Alexander Cazares) was just a nightmare. A big plus with going the distance was that I got 18 corner breaks with Joe (Gallagher, his recently appointed coach) and that was invaluable. We got to understand how each other operates in the heat of battle.

Would it be accurate to say that you are a more natural, and therefore better, bantamweight today than when you outfoxed Darlington’s Stuey Hall to lift the IBF crown in June 2014.
Absolutely. Back when I beat Stuey, I was still a genuine super-fly but the opportunity surfaced to move up and challenge him. I had to put a bit of size on to counter against getting bullied by Stuey, a big, strong lad, in the later rounds. But it was always the plan to drop back down to 115.

Two and a half years on, I naturally grew into 118. For Stuey, I was eating steak and fries the night before the weigh-in whereas now, it’s not easy for me to make bantam. I have to be very strict with my diet and that’s how it should be.

The main plus with returning to bantam is that I can train to learn, go through the game plan, rather than simply training to lose weight in a sweat suit.

In Jamie McDonnell (WBA), Zhanat Zhakiyanov (WBA Super) and Lee Haskins (IBF), there are already three world bantamweight titlists operating from these shores. How would you go about dethroning them?
You can forget those three, 100% I’m the best bantamweight active in Britain.

Zhanat’s a good kid; strong and raw. Give him his due, that was a tough ask against Rau’shee Warren over in the States but he came through so deserves credit. He won on heart and grit. I’ve never sparred him but Scott Quigg did so Joe’s familiar with him. He’s not the most skilled so I’d be giving him a boxing lesson.
Lee’s definitely the most awkward of the three; a southpaw who doesn’t seem to know what he’s throwing himself so it’s very hard for opponents to read him. But he’s come through the hard way to become world champion without huge backing or TV so he deserves his props. That said, I thought he was fortunate to get the decision over Stuey Hall last time. He gassed massively in the later rounds so he’d not fancy my body punches much. I’m very confident I’d hurt him.

To find a blueprint on how to beat McDonnell you only need to watch a tape of his last defence against (Venezuela’s Liborio) Solis fight. I thought he lost by three or four rounds but I’m glad he got it cos now we can have a big money showdown.

Jamie only likes to work when it suits him. His best wins were the two against (Tomoki) Kameda who allowed him to do that. The key to beating McDonnell is to apply educated pressure at the right time. You can’t charge in but you need to show him no respect and put it on him from first bell to last. Eventually, I’d break him down.

So what do you need to do to secure a showdown with any of the above?
The McDonnell fight is the one we want in the summer on BT Sport and BoxNation, provided I deliver in style in Manchester on Saturday. And I’m very confident that I will.

Given you are now within touching distance, will it be necessary to proceed with caution against Senor Ruiz on Saturday?
Not consciously. I had a little look at him yesterday and he’s decent. He dropped (two weight WBA champ) Luis Concepcion early doors for the WBC Silver title (2013) before getting stopped late on so I’ll probably have a little look for a few rounds.

I’ve always been a pretty instinctive talent but Joe’s made me more rounded, more savvy and more disciplined. Looking back, my world title possibly came too soon. Everything, including my ring style was too quick back then. Joe’s slowed me down and has me setting little traps, throwing the right punches at the right times, rather than just letting my hands go. That said, I won’t hesitate to take Ruiz out if the opportunity presents itself.

Britain is presently blessed with 11 reigning world champions but you aren’t one of them. On a domestic pound-for-pound list, where would you place yourself?
That’s difficult because the world champions have all earned their space and I’d hate to appear disrespectful. But if you’re talking ability wise, I’m a lot more talented than several who are holding belts. I’m one of the most skilful boxers active in Britain so definitely in the top half dozen.