PERFECT SINGH CRUSHES GILLEN IN ONE ROUND IN DUBLIN

India’s boxing sensation Vijender destroyed Dean Gillen inside one round with a phenomenal power-packed performance at the National Stadium in Dublin in his first ever professional fight in Ireland. 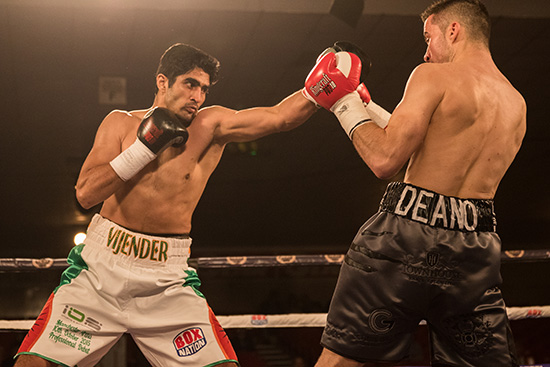 Singh followed up his pro debut last month, when he smashed Sonny Whiting at the Manchester Arena, with another destructive display, but in less than half the time, as he pummelled Nottingham’s Gillen with big right hands.

Gillian went down in the middle of the round, which was ruled a slip by the referee, but Singh went straight on the attack.  He didn’t let Gillen rest as he landed punch after punch with Gillen in the corner until Singh detonated a devastating right that dropped him and left him unable to beat the referee’s ten-count at the end of the round.

The 30-year-old from Haryana, who’s based in Manchester, was delighted with the performance which was again televised live to his homeland in India on Sony Six and the viewers couldn’t have failed to be impressed by his explosive display.

“Wow! that was quick, man!” Said an excited Singh.

“I felt very comfortable in there and lined him up with my jabs first to get the range, but then when I started connecting with the right I knew it was only a matter of time before I caught him properly,”

“He went down, which the referee said was a slip, I wasn’t so sure about that, but anyway when he got back up I knew I’d hurt him so I went straight into him and didn’t stop punching until he went down,”

“When I landed the last right hand and he dropped I had a feeling that he wasn’t going to get up and when the referee counted to ten it was a fantastic feeling to get my first KO on my record,”

“I said that after the first fight I’d improve and I think that I showed some of the development and improvement tonight, but there’s a lot more to come from me.”

Francis Warren said, “That was very very impressive from Vijender and I’m delighted that he made such a big statement here tonight in Dublin and to the viewers on BoxNation and it also went live to India and that must have gone down a real treat there.”